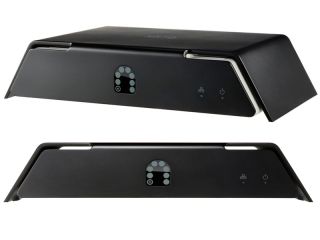 SlingCatcher has a singular role: to gather content from multiple sources and make it available on your TV

SlingMedia's SlingCatcher has a singular role: to gather content from multiple sources and make it available on your TV. It can receive that content from many sources.

For instance, SlingCatcher can work with a SlingBox to take content from one TV in your house and display it on another. Alternatively, PC content could be gathered on a central USB mass storage device using the SlingSync feature. Or the SlingProjector option takes any PC-based video content - from YouTube, say - and sends it to your TV.

In short, the SlingCatcher is like a set-top box that captures video content from a range of different sources and makes it available to your home cinema system.

"SlingCatcher... [is] capable of pulling content from disparate places and consolidating them onto a single TV screen," says SlingMedia, "giving the customer complete control of their personal media".

And an upgrade to the useful SlingPlayer software - unimaginatively called SlingPlayer 2.0 and bundled with the SlingCatcher - adds an EPG, the ability to grab clips of TV programmes to share online, and a 60-second video buffer to pause and rewind live telly.

SlingMedia's solution to the digital home concept is taking a more convincing shape. The idea is to offer a range of different products that solve different problems with regard to moving and accessing content between devices.

You can buy into any one part of the 'Sling' system to resolve a particular content issue, or invest in the whole lot for a more complete multi-room solution.

SlingCatcher - with three built-in applications: SlingPlayer for TV, SlingSync, and SlingProjector - is the best place to start if you want to consolidate your content. Add a couple of Slingboxes and you have a multi-room solution. Or wait for the forthcoming Slingbox PRO-HD and you've got yourself a multi-room high-definition video solution. Hurrah!

The 'digital home' in action

The SlingCatcher box has standard and high definition AV outputs (including HDMI), as well as the usual analogue and digital audio outs. For networking there's an Ethernet jack, or you could invest in a SlingLink powerline Ethernet adapter or Sling's new wireless USB adapter (called SlingLink Wireless - but you probably guessed that).

Sling.com - which currently has a 'coming soon' notice on the homepage - will become a hub of content clips posted by SlingCapture users. The 'Clip+Sling' feature on the SlingPlayer 2.0 client software allows users to capture snippets of programmes and post them to this website, for sharing with friends or the Sling user-base at large. It'll be interesting to follow the uptake of this service and, if it proves popular, to see how long it will take before broadcasters kick up a fuss.

The SlingCatcher is - apparently - due for release in the UK later in 2008.