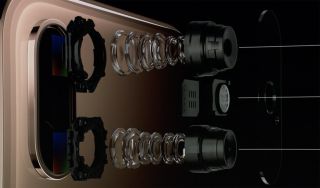 Poor Apple. News of a sharp decline in iPhone sales, and a corresponding 17% drop in iPhone revenue for the last quarter, to a paltry $31.05 billion, illustrates just how hard a time it's had maintaining its lofty position in its key market.

A few years ago, as the iPhone started to become the phone of choice for many people, Apple's marketing shifted away from the device's design and ease of use and more towards the photographic side.

We still had the adverts that concentrated on the device's sexy curves and minimal styling, but more of the Keynote presentations would be dominated by details of bigger sensors, faster lenses, and more intelligent sensing and processing power.

Images captured using the devices were blown up into billboard-sized posters, with 'Shot on iPhone' proudly displayed alongside, a tag that first appeared with the iPhone 6 in 2014 and which is still used today. Sure, there would always be a caveat that these images were optimized for printing to such beastly dimensions, but the message was easily absorbed: if the image quality is good enough to be plastered on a billboard, it's definitely good enough for whatever you're planning on shooting.

While the odd phone from the likes of Nokia (Pureview 808, Lumia 1020) and HTC (One M8) had a better camera, the overall package – the design, the simplicity, the ecosystem – was enough to keep most in camp iPhone – and with it, most people iPhone photographers. In 2015, one in every three images on once-popular-but-now-somewhat-irrelevant photo-sharing site Flickr would be captured on an iPhone. A year later, eight out of the most commonly used cameras on the site were iPhones, and things only got rosier for Apple the following year.

But competitors were keeping an eye on this rise, and Apple soon started to become something of a victim of its own success by choosing to place so much focus on the capabilities of its phone's cameras. Sure, taking on Apple's ecosystem, and the seamless integration between iTunes, iCal and other apps, would be difficult, but Apple's roots weren't in photography, and so picking a fight here would be considerably easier – and complacency on Apple's part would be a big mistake.

Longstanding rival Samsung started to catch up with the devices on its Galaxy models, while Huawei partnered with Leica, perhaps the most respected name in the photography business, proudly emblazoning that name on its devices. Google made the camera the focus on its Pixel models and did it pretty well, while newer players like OnePlus and Xiaomi raced to get more affordable offerings up to standard.

It wasn't just the wider choice of products from a broader pool of competitors that started to erode Apple's dominance, but the frequency of new phone launches meant that exciting new features from Apple could either be replicated, bettered or in some way overshadowed more quickly than before.

Slowly we started to see more and more rear-facing cameras, brighter lenses and new opportunities to venture into telephoto and wide-angle capture with credible results. This was all iced with faux bokeh – fauxkeh, if you will – and portrait-focused lighting effects, together with impossibly clear night-time capture modes, and AI-based features to better tweak your results.

The more prolific output from some of Apple's rivals, together with a more tiered approach to its own offerings, meant you no longer had to spend an astronomical sum to have a decent camera on your phone. This shift was increasingly obvious and, to its credit, Apple responded accordingly, and slowly the iPhone unshackled itself from its premium billing and became a more accessible device for many.

Of course, many people don't have the camera as their priority when choosing a new smartphone, and the drop in iPhone sales clearly isn't just down to whether their cameras remain up to scratch. But Apple's focus on the strength of its cameras can only take it so far. The top five slots on DxO Mark's mobile scoring table are currently occupied by Huawei and Samsung, while looking at the top 30, Apple holds a respectable five positions, but so do Huawei, Xiaomi and Samsung.

It's expected that iPhone sales will improve once the company launches 5G-compatible models, and no doubt when it does, Apple stores across the world will once again be besieged by queues of devotees who prioritize being the first to get their hands on a new iPhone over showering. But this has never been down to the camera alone, and it's likely to only remain a small part of the overall draw.

Dedicated cameras with much larger sensors and better performance are not expensive, and while that market is suffering, such cameras will no doubt remain the first choice for those who require high image quality. But when it comes to the imaging capabilities inside smartphones, the playing field is as level as it's ever been. With so many other credible options now available, only something truly game-changing from Apple will make a difference in the eyes of the more considered photographer.