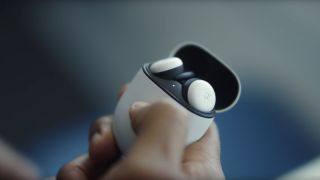 Google's long-awaited true wireless earbuds could be available to buy very soon, after the new Pixel Buds were spotted by 9to5Mac in a new Bluetooth Certification listing.

The listing included two model numbers, G1007 and G1008 – and as 9to5Mac points out, this could be an indication of two separate models (the Pixel Buds and Pixel Buds Pro, for example), or more likely, each number representing the left and right earbuds separately.

We were given a glimpse of the tech giant's first true wireless earbuds at last year's Made By Google event in October, during which we told to expect their release during the first half of 2020.

Now that the Pixel Buds have been registered with the Bluetooth Special Interest Group, it looks like Google will have no problem meeting that release window – and with the Google I/O 2020 expected in May, we wouldn't be surprised if Google's true wireless earbuds are released then.

Pricier than the 'Pods

As Google's answer to the Apple AirPods, the new Pixel Buds eschew the neckband design of their predecessors, cutting the cord between the two earbuds for a truly wireless form factor.

They're set to cost $179 when they're finally available to buy in the US; this works out at around £140 / AU$265, but official pricing outside in these regions is still to be confirmed.

This could make it tricky for the new Pixel Buds to truly compete with the 2019 AirPods, especially as they offer the same battery life – five hours from the buds alone, and up to 24 hours with the wireless charging case.

The new Pixel Buds do offer an alternative to Apple's rigid styling, coming in bright orange and mint, as well as the standard black and white colors. Sitting flush against your ear, Google's earbuds also look more subtle than the protruding stems found on the Apple AirPods.

We'll have to wait for the new Pixel Buds to be released before we can assess the sound quality on offer here, but a spatial vent at the bottom of each earbud should provide an open soundstage, hopefully avoiding the 'closed off' sound that can occur with in-ear headphones.

According to Google, an Adaptive Sound feature "dynamically adjusts the volume as you move from a quiet environment to a noisy one, so you don’t have to constantly raise or lower the volume," while beam-forming microphones and a voice accelerometer should deliver clear-sounding calls.

Google also says the buds' connectivity is so far-reaching that you could leave a distance the length of an American football field between your device and the new Pixel Buds – that's 100 yards (around 90 meters).

That all sounds impressive, but there are some features that you might expect for that price missing – like AirPods Pro-style active noise cancellation – making it unclear whether Google's earbuds will be able to compete in the rapidly developing wireless audio market.