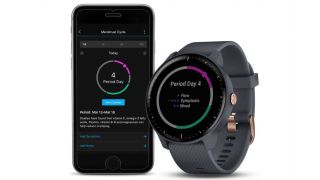 Along with the announcement of the Garmin Forerunner 945 and three other new running watches, the company has introduced menstrual cycle tracking into the Garmin Connect app for iPhone and Android.

The new feature allows you to monitor your cycle as well as the symptoms of your period to track how it can effect your exercise routine.

It's a feature that has previously proved popular on the Apple Watch and Fitbit devices too. Garmin's feature also offers functionality for different types of period cycles including irregular, pre-menopausal and menopausal.

You'll be able to enter your period's start and end date on the app as well as include notes on your symptoms. Garmin offers both reminders of periods and fertility windows too.

After a while, you'll then receive reports on how your performance changes throughout each phase so you can better decide how to exercise during those times of the month.

It can also provide insight into your sleep and appetite too, giving you a clearer picture of how your cycle can effect your daily routine.

The features will be available on your Garmin phone app in an upcoming update, and you can download the Menstrual Cycle Tracking widget from the Garmin IQ Store to certain wrist based devices too.

That's limited to the Garmin Fenix 5 Plus range, the Vivoactive 3 and 3 Music, as well as select Forerunner devices. Those include the new Forerunner 245, Forerunner 245 Music, and Forerunner 945 alongside the existing 645, 645 Music and 935.

Via Gadgets and Wearables