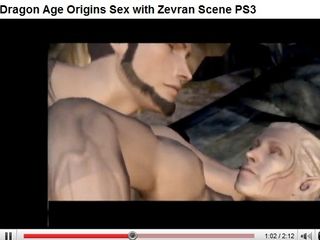 The hugely popular and critically acclaimed new game Dragon Age: Origins features a scene in which a man and an elf build up to gay sex.

Players of the game can see the graphical representation of a man seducing a warrior elf called Zevran.

Perhaps the only real scandal here is the cheesiness of the chat-up lines ("Can you join me in my tent?", "Is there something in your tent that needs assassinating?","I bet you're good at a lot of things").

"I want to discuss something personal"

It would seem that Zevran is perhaps a little too keen to be seduced, in TechRadar's humble opinion…

Developer BioWare has predictably come under fire from its millions of (largely homophobic) teenage fans online, though TechRadar thinks the company should be praised for including such a straightforward scene of everyday human interaction in its game.

Only website GayGamer.net seems to have been positive in its praise of the move, noting that "with this bare-chested and unflinching portrayal, it feels as if the depiction of gay sex in video games has reached a new level of equal treatment.

"This is more than just a mincing gay pirate or an evasive fade-to-black: there's choreography, tenderness, humor and even an element of sexual politics to Zevran's post-coital conversation.

"Kudos to BioWare for adding a bit of a gay storyline to their game and for dealing with gay romance as even-handedly as they do the heterosexual options."

Dragon Age: Origins is out now on PlayStation 3, Xbox 360 and PC

You can see the scene that is causing such a fuss right here and make your own mind up: The game is rated 18 so it's potentially NSFW - your call.