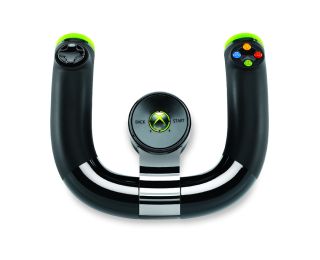 Microsoft has revealed a new wireless steering wheel for the Xbox 360 at E3 2011.

As you can see from the press pics just released, the new wireless Xbox 360 wheel is quite "space age" in terms of its design.

Microsoft says that the wheel is "controlled intuitively" with haptic feedback so the wheel rumbles when you throw your virtual Forza cars a little too heavily into a corner, and so on.

The wheel also features triggers brake and accelerator control, with "green bands of lights on each handle to provide visual cues when necessary".

No official details on a UK release or price yet, though we do know that the wireless wheel will cost our American cousins $59.99 (£35) when it arrives in early October.

"This device combines a fun and immersive driving experience with the biggest racing game of the year, the best rated Forza Motorsport," promises Microsoft.

"The new Xbox 360 Wireless Speed Wheel balances the realism of a wheel with the feel of a controller for greater user edge in game play."