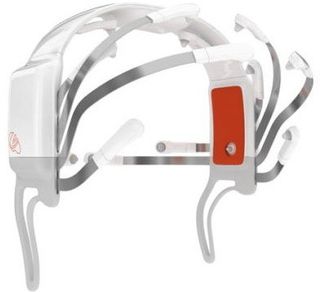 Nintendo’s Wii has expanded the market for gamers with its user-friendly motion-control interface, yet a new ‘brain-powered’ headset promises to let gamers interact with virtual worlds via their thoughts.

Emotiv's Epoc ‘neuro-headset’, pictured here, interprets the interaction of neurons in the brain. The company claims that the headset can detect more than 30 different expressions, emotions and actions – such as smiling, winking, grimacing and angry or happy responses.

Emotiv’s president Tan Le told the BBC: "It picks up electrical activity from the brain and sends wireless signals to a computer". It allows the user to manipulate a game or virtual environment naturally and intuitively."

She added: "Emotiv is a neuro-engineering company and we've created a brain computer interface that reads electrical impulses in the brain and translates them into commands that a video game can accept and control the game dynamically."

Paul Ledak, vice president, IBM Digital Convergence told the BBC that devices such as the Epoc headset were an important component of the future 3D internet and the future of virtual communication.

“Well, it's pretty silly really. A $300 headset is unlikely to be responsive enough to allow you to fully control a first-person shooter with the same degree of accuracy as a mouse and keyboard - so I don't think there's a chance of this ever replacing current control methods.

“What's interesting however, are the possible applications it might have beyond simply controlling your character - if this headset can read emotions, perhaps the game could change the music and atmosphere to suit your state of mind.

"In a horror game, the game could time its scares perfectly by knowing when you're at your most nervous. Of course, these are gimmicky features, and I can't see games developers investing time and money implementing them into their games.”