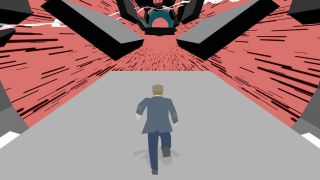 Boson X is a great iOS game, so why haven't you played it?

I was just reminiscing about the many great games I've thoroughly enjoyed playing on iOS, which collectively have turned Apple's platform into one that somehow (and surprisingly) managed to surpass the venerable Commodore 64, much-missed Dreamcast and rather wonderful Nintendo DS in my affections.

Of late, you'd be forgiven for thinking that iOS has no good games at all. On reading opinion pieces online, you're probably now imagining iOS as some kind of post-apocalyptic gaming wasteland, where the slowly rotting form of Sonic the Hedgehog begs passers-by for money, before being crushed to death by the dual horrors of EA's in-app-purchase juggernaut and a tsunami of mediocrity.

This time round, Dungeon Keeper and Flappy Bird are at the forefront of everyone's minds. The former is apparently EA seeing just how far it can push the concept of freemium gaming before angry gamers snap and march on EA HQ, in order to batter the company's accountants to death with obsolete (but now suddenly rather usefully heavy) original iPads.

The line of thinking was apparently this: take a much-loved classic game, add as many timers and hateful roadblocks as possible, then send out lots of press releases saying how AMAZING and FREE and AMAZING it is, carefully avoiding highlighting the broken gameplay and hateful in-app purchase system.

And then there's Flappy Bird, a one-thumb survival game that appears to have time-travelled from the early days of the App Store when most games were rubbish.

If you've not played Flappy Bird, too late, because the dev pulled it from the App Store, but it was the mediocre yet oddly compelling equivalent of a novelty summer pop-chart single - Mr Blobby in app form.

All great games, but you've probably barely heard of any of them. That's because most - SHOCK! - require up-front payment (albeit only an amount akin to buying an 8-bit game. On cassette. In 1985), rather than pretending to be free and then throwing up roadblocks that you can skip by buying a 'Stupidful of Gems'.

Also, many of these titles are by indies, who lack the resources of an EA, and so their amazing efforts often go unnoticed. And then Apple merrily bleats about the latest freemium tat, giving it an Editor's Choice, while the cream of iOS gaming goes largely unnoticed.

Fundamentally, though, this is all YOUR fault. Yes, YOU. The iOS app ecosystem has gotten to the point where too many people want something for nothing. They expected games to be cheap, and now they expect them to be free and updated forever, because developers can apparently survive on a diet of air.

Furthermore, people are suckers when hooked, meaning they'll abruptly forget about their miserly nature and happily shovel money into a game putting up roadblocks, like a crazed gambler laughing like a maniac at a casino slot machine.

So, how to fix things. First, Apple's probably not going to do anything. The company has never had a clue about gaming, and it's not about to find one down the back of the sofa.

The only solution is to start shouting louder about genuinely great games, and recognising that paying a few quid upfront for a title beats paying nothing initially and then getting mugged shortly afterwards.

Alongside, punish the bad games by ignoring them; if a game erects arbitrary barriers because a publisher decided the best way to make money was to literally stop people playing it, then play something else. Invest in developers who care about you having a great user experience and an entertaining time, not those who merely see you as a wallet on legs.

Naturally, that all sounds a bit grass-roots, and it could amount to a drop in the ocean; but that might just be enough to stop iOS gaming sliding into a cesspit that it cannot escape from. And if you want a starting point, check out the dozens of games already mentioned on this page.