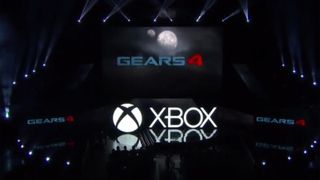 Even Marcus Fenix himself couldn't stop Microsoft from showing off a new Gears of War game, called Gears 4, on stage at its E3 keynote held Monday morning at The Galen Center in Los Angeles, California.

Developed by Black Tusk Studios, the next entry in the Gears of War franchise will take a squad of COG soldiers down the grub hole one more time.

Get on with it now: the weapons?

The short demo played on stage featured two characters, one a man and the other a woman, in a stormy confrontation with some beastly aliens. Are they Locusts? They look a little too ... feral for that.

We caught a glimpse of the some of the badass weaponry you'll be wielding soon enough. The trailer below shows off the gnasher shotgun, famous lancer and snub pistol. Oh yeah, and we can't forget the trusty chainsaw when things get dicey.

Sadly, that's about all we know so far. Gears 4 will be exclusive to Xbox One when it releases in the distant next holiday of 2016.

A taste for Gears on Xbox One right now

Microsoft Studios didn't stop there with the Gears announcements, offering up a chance to light up some Locusts on Xbox One right now.

The company announced that Gears of War: Ultimate Edition, a full HD remaster of the original Xbox 360 game for Xbox One, will release in a public beta version today, June 15. The spanking-new take on the first game in the series has been remastered in 1080p resolution running at 60 frames per second – and that goes for multiplayer, too.

While you'll get to try out the new-and-improved, original gritty gunner on Xbox One now, Microsoft made no mention of a final release date. There's no time like Christmas time, right?