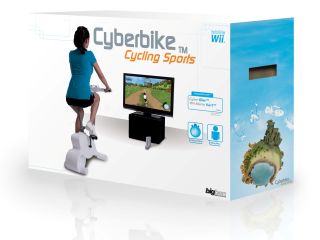 New exercise bike for Nintendo Wii out next January

Bigben Interactive has unveiled the Cyberbike - the latest exercise (gamer-cise?) peripheral for the Nintendo Wii.

If you are a fan of virtual cycling, and don't fancy any more yoga and hula-hooping with Nintendo's new Wii Fit Plus (out this Christmas) to fight off the inevitable new year flab in January, then Big Ben's new bike for the Wii could well be just the ticket.

You can see the new peripheral (along with screenshots from the new game that is bundled with the kit) pictured here. Presumably you are also going to need plenty of room in your under-stairs cupboard to store it! (Unless you like your lounge looking like a gym).

"The very first videogame that comes with an exercise bike," is how Big Ben is selling it. Well, unless you count all those rather dull 'exer-games' at your local gym, that is.

The game lets you ride "some of the most improbable vehicles ever imagined" and features a total of 18 different circuits on land, sea and air, with the options to upgrade your ride with various new accessories.

There is even some element of 'saving the environment' worked into the game, by which you fight pollution like a true eco-warrior. On a virtual bike.

Cyberbike also features three modes - Fitness, Story and Multiplayer, so up to four different players can hop on and off the bike to take on each other.

Cyberbike is out this coming January. Big Ben is also releasing My Body Coach for the Wii next month on 20 November, featuring "trainer to Hollywood stars" Valérie Orsoni who will help you with your fitness routines and your diet. And which (rather frighteningly) ships with two 500g dumbbell peripherals.

Here's the video demo to whet your whistle: