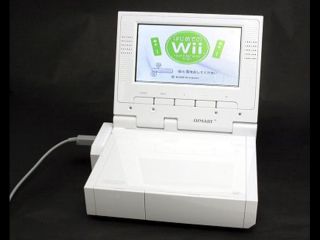 It may be clever but what's the point of Century's Wii LCD screen?

It's not the most obvious choice for a mobile gaming machine, but Nintendo's Wii console has just received an add-on in Japan that gets it up and out on the road with its very own screen.

For ¥14,800 (£60), Wii fans can pick up a 7-inch LCD display from Century Corporation that clips onto the edge of the console. As you'd expect, it includes a small version of the sensor bar that allows Nintendo's blockbuster to do the whole motion-detection thing that has made it this year's black.

As for the connections, there's a breakout box that clips onto the side of the Wii to keep the screen and AC cables out of the way in one handy unit. Alas, the reality of a Wii battery pack to free the machine entirely is still some way off.

While Century's Wii screen is a very clever piece of engineering - and, obviously, marketing - it's hard to see the point of buying one. Especially when considering that the console is simple to attach to any old TV. And that standing the necessary 5 feet from a 7-inch screen might make it a challenge to see much of what's going on.