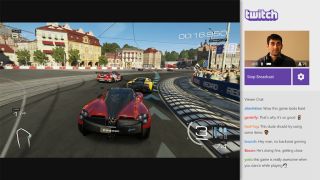 After a long delay, Twitch live streaming is making its way to the Xbox One on March 11.

Yes, March 11, as in the same day Titanfall drops.

When the newly updated Twitch app arrives, players will be able to holler "Xbox, Broadcast" or launch from the app to start beaming. On top of broadcasting, Twitch has updated the viewing experience on the next-gen console. Users will receive notifications whenever their friends start streaming, and sitting in on anyone's live stream will open an option to leave a chat message.

Xbox One Twitch users can also check out broadcasters' profiles, and viewers can follow, send party requests and join games thanks to the service.

Finally, Xbox One owners will be able to watch live gameplay from any Twitch source, whether the One, Xbox 360, PC or PS4.

Previously, Twitch integration on the PS4 helped propel the live streaming giant to one million users. Since arriving with live streaming capabilities, the pool of PS4 Twitch broadcasters has ballooned from 100,000 to over 200,000 in just a few months.

So far Xbox One owners have patiently been awaiting for the ability to broadcast their live gameplay sessions.

One thing Microsoft's implementation has over Sony are 10 viewing achievements. These achievements are tied to simply watching copious amounts of video game entertainment ranging anywhere from one hour to a whole night's worth in one sitting.