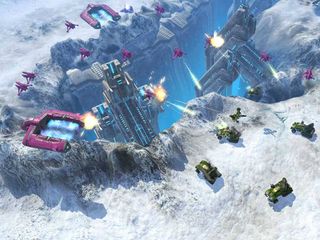 Anyone at last night's Microsoft CES keynote who was holding their breath for big gaming news was out of luck. Granted, CES is an electronics show rather than a games show, but there were a few hopes pinned on the keynote speech dropping a few fun-bombs.

Unfortunately for gamers, the now visibly Gates-less mega-corp was far more focused on its Windows family this year - but it did make time for another spot of chest-puffing about the Xbox 360, reiterating that it's sold 28m units of the console to date.

A new boast is that Halo series has sold 25 million copies to date - a number that comprises the two Xbox 1 Halo games as well as the 360's Halo 3. It smacks a little of a fight back against Activision's Call of Duty 4, which is increasingly stealing Halo's thunder as the defining 360 shooter.

New additions to the Halo series

Microsoft did at least set the stage for a couple of shots in the arm for the Halo series. Halo Wars, the real-time strategy game developed by the soon-to-be-defunct Ensemble Studios, was given a definite release date: 28 February. Ahead of that we'll get a demo on 5 February. February's an unusual time to be releasing a big-name first-party game like that, which could hint at a certain lack of faith in this new take on the Halo universe - or perhaps it's as simple as knowing that RTSes traditionally don't sit all that well on consoles. Halo Wars is going to be fascinating, as it's taking the series' fanbase out of its reticule-based comfort zone.

Speaking of which, there was more confirmation that the first Halo 3 expansion, the awkwardly-named ODST (formerly 'Recon') was still on track for this year, but there was a noticeable lack of fun new info-gobbets about it otherwise.

Which left the closest thing we got to a surprise as Kodu. This kid-orientated game looks to have more than a little in common with the PS3's Little Big Planet - it's a cheery, easy-to-use game-building application.

While Kodu might well reek of typically Microsoftian Anything You Can Do... shamelessness, it's hard to deny that Kodu's a good thing for the 360. Microsoft is transparently fighting to reposition the console as family friendly in the hope of snatching a piece of tasty Wii pie, plus something that proliferates Xbox Live with custom-made mini-games will help cement its position as the most online-enabled of the current console generation.

What we don't know is whether Kudo will appeal to gamers at large as much as it (hopefully) does to young 'uns, but it's certainly looking like a smart way to help bust the 360 out of its relative niche.

Other than that, it's been a keynote almost devoid of gaming revelations. Not hugely surprising given the nature of CES, but there has been some speculation that Microsoft had so much up its sleeve last year that it can't possibly match itself in 2009.

We'll find out in a few months, as springtime games industry tradeshows like E3 reveal what is and isn't planned for the year ahead.