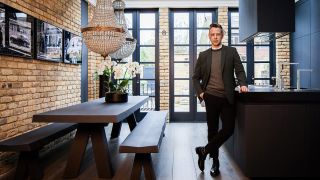 In recent years we've seen an explosion in connected home technology. Philips has released and subsequently iterated on its connected lighting range, Google has continued to iterate on its line of Nest smart thermostats, and even Samsung has got in on the action with its SmartThings line.

Now a company in the UK called Loxone has created a single connected home system that covers everything from lighting, to security, to heating, and even your music player and window blinds.

It doesn't cover appliances such as fridges or ovens like some other connected home technologies, nor does it sync with your smart television like Samsung's recent releases. But it covers an impressive range of devices all the same.

The advantage with going with a single company is simplicity. Rather than having to configure your Nest to work with your smart lighting for example, Loxone will instead set up your entire system, leaving you to enjoy your connected home rather than having to tweak it to your liking.

This addresses a major concern with smart home technologies, which is that it can be a struggle to get them to work together successfully. Each system has its own app and its own control system, which isn't exactly the most seamless user experience.

Progress in the area is being made, such as with Google's 'Works with Nest' initiative to bring smart devices into a shared ecosystem, but for the most part the automated home remains a bit of a mess.

Meanwhile with Loxone, everything is controlled through a single app, allowing you to for example sync your lighting with your security system to set the lights to automatically turn off when you leave the house and lock the front door.

The result is an experience which is theoretically much more seamless than sewing together systems from various different providers.

One example given by Omid Nikroo, Loxone UK's Project Development Manager is a unified routine which activates when you get home. A sensor by the front door could recognise your arrival, leading to both the lighting and the heating coming on, as well as a certain playlist being played over the speakers.

Another example is a morning routine. The system can recognise when you're coming downstairs for breakfast, and can then raise the blinds in your kitchen as well as turning on the lights and putting on the radio.

All of these features are controlled through Loxone's app, which is more or less ok at dealing with the sheer quantity of tasks the system involves. House features can be viewed by either room or system category, keeping everything where you need it.

The app seemed fairly intuitive when I got my hands on it, but it was a little unresponsive at times. In particular the long-press function, which is used to bring up additional options, would occasionally fail to activate, leaving me with no option than to navigate round the menus the long way.

We were impressed with Nest when we reviewed it a couple of years ago, but the system's downside is that it is based around the idea of controlling your whole house with a single thermostat.

If your house is anything like mine then your thermostat is probably in a central hallway, which is likely to be one of the warmer parts of the house.

The result is that the thermostat might not realise that a room upstairs is much colder, and might subsequently not turn the heat on.

Loxone's system solves this problem firstly by having temperature sensors in each room, (they're hidden in the smart light-switches) and secondly by taking remote control of each of your radiator's valves individually using a small remote control.