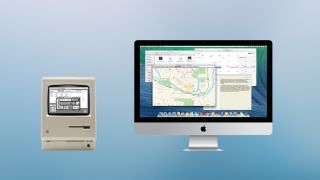 When you're busy making photo books in iPhoto, browsing the web in Safari, or preparing rich, beautifully laid-out documents in Pages, it's easy to forget about the operating system that powers your Mac. It's just… there, isn't it? It's such a fundamental part of your Mac that lots of people understandably struggle to even really know what an operating system is. Without one, though, your Mac would just be a pretty but utterly useless collection of metal, plastic and silicates, so let's take a moment to honour the Mac's operating system.

This, after all, is the soul of the Mac. Broadly speaking, these days it's the only thing that differentiates a Mac from a PC – at least at the level of the individual components that make it tick – and makes it special.

There are two great ages of the Mac OS; the first started with the introduction of the original Macintosh a full 30 years ago, and the second started in 2001 when OS X made its formal debut. Mac OS X – the Roman numeral being pronounced 'ten', of course – was a much bigger change from Mac OS 9 than the simple version number increment might suggest.

It might be for you that what follows is a lovely warm hug of nostalgia as you remember icons and quirks of the OS that have disappeared, but if you're new to the Mac, enjoy watching the evolution of the operating system you're using today...

30 years ago, Apple introduced the world to the graphical user interface – and the world loved it. No, Apple was not the first to make a GUI, and no, the Mac OS wasn't even Apple's first GUI. But it was this approach – using metaphor and pictures to make it easier and more intuitive to use a computer compared to having to remember and accurately type lines of code to achieve anything – that stuck, and influenced every personal computer that came after it.

It's only now that we're beginning to get a glimpse of a computing system that's not a direct descendent of the Windows, Icons, Menus and Pointers paradigm introduced with System 1 – with touch-based, personal devices such as the iPhone, and then possibly with wearable devices such as Google Glass and immersive platforms such as the Oculus Rift.

System 7.5 added a lot of features to the Mac's operating system – many by the simple expedient of Apple purchasing shareware apps and integrating them into the OS. It had taken 12 years, for example, before there was a clock in the menu bar – previously a control panel called SuperClock. Stickies, the ability to collapse a window down to just its title bar, a hierarchical Apple menu system, and even the app for managing system extensions were all third-party acquisitions, too. Plus, the bundling of MacTCP meant that, for the first time, a Mac could connect to the internet out of the box.