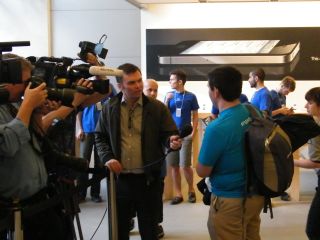 Ben Paton - first with an iPhone 4

Ben Paton of Stoke on Trent was the first man out, but expressed sympathy for Alex Lee, who had queued for DOUBLE the time, but was curiously moved back by Apple.

Lee told TechRadar that he would be emailing Jobs in the hope of an explanation, expressing his anger that he missed out on being first.

When asked by TechRadar if he was 'a little cross' he replied: "Absolutely.

"I've been approached by media asking me why I'm not the first person in today and I don't have an answer, because I've been queuing for a lot longer than anyone else.

"My only thing is that I can't do anything about it now, but if you don't like what you've seen then emailing Steve Jobs is a good way of getting hold of someone that matters."

Lee's frustration was a rare sour note in an otherwise enormous but friendly queue, with 23-year-old Paton enjoying his 15 minutes of fame as first through the doors.

"It's been an incredible experience," he told TechRadar. "I did ask if [Lee] could be moved into the front of the queue.

"Alex Lee had been there since a couple of days ago."

So to the list of famous second places like Buzz Aldrin and Ultravox's Vienna add Alex Lee – 32 hours to come a distant runner-up.