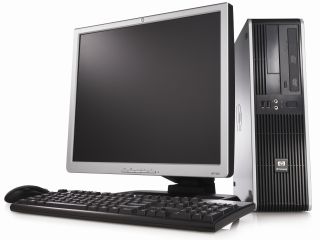 The The HP Compaq dc5700, along with two other computer systems, is now available in configurations meeting the Energy Star 4.0 requirements

HP has launched three Compaq business PCs that meet the latest energy ratings from the US Environmental Protection Agency . HP said on Monday that the new computers can be configured to meet the latest government standards for energy-efficient computer use.

The HP Compaq dc5700 , HP Compaq dc5750 and HP Compaq dc7700 desktop computers are available with 80 per cent efficient power supplies, which means most of the incoming electricity is converted into usable computer power.

Energy efficiency is a key requirement in the US Environmental Protection Agency's Energy Star 4.0 specifications, which come into force on 20 July.

Computer makers whose products meet the standards can display the Energy Star logo on their compliant machines.

Running the computers with the energy efficient power supplies and configuring other hardware to the Energy Star specifications can reduce a computer system's total power consumption by 52 per cent, HP said. This works out as cost savings of up to $58 (£30) per year, according to the company.

The HP Compaq dc5750 desktop is also available in an energy-efficient configuration. The machine includes most of the same components, with the exception of an AMD Athlon processor, and 512MB of memory. The system is priced at $609 (£316) and is available now.