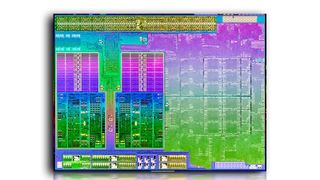 AMD's kicking it up a knotch

AMD announced the retail and distribution channel availability of six A-Series Component Desktops APUs today, marking the public release of the second-generation of processors in its A-Series line.

"The new AMD A-Series APU is ideal for anyone looking for a new desktop or home theater PC with leading performance for the dollar," said Leslie Sobon, corporate vice president, Desktop and Component Products, AMD, in a press release.

"The combination of processing speed, multiple compute cores, and discrete-level graphic capabilities on the second generation AMD A-Series APU make it an excellent platform for the gamer and PC enthusiast alike."

The chips, with pricing, are:

With more than 700 GFLOPS of computing performance, up to 4.2 GHz max frequency, and unclocked CPU with AMD OverDrive software for up to 6.5GHz of overlocking capability, AMD's new processors are hot to trot.

This means PC users have more control over their system to overclock both their GPU and CPU, while gamers can increase their memory frequency.

AMD said it stacked its processors up against the competition and found that for the price, its chips offer more cores, more speed, better entertainment, and an easy upgrade path thanks to a "stable socket infrastructure."

AMD's making no qualms about the fact that these chips are designed for the Windows 8 experience, which the public can grab hold of Oct. 26.

Because of the processors' hardware-accelerated support for DirectX 11 on AMD Radeon graphics and AMD's Eyefinity Technology, AMD said its chips are ideal for W8 and the already-here Windows 7 OS.

According to AMD, its Eyefinity feature is the only multi-monitor technology that supports a single-surface Windows 8 experience for up to four monitors.

Furthermore, AMD said this is the first time the technology is available from an APU without the need for a discrete graphics card.

That's not to say a discrete graphics card couldn't be thrown into the mix, as the Radeon Dual Graphics support delivers a performance boost of up to 75 percent when one is added to the APU.

Get in the zone

Users of AMD's APUs also gain access to the company's AppZone and a complete list of accelerated applications that leverage the full compute power of the APU, the company noted in its release.

As for graphics, because the new A-Series chips take the "Piledriver" CPU's architecture and mash them with the Radeon HD 7000 Series graphics on a new FM2 motherboard, the visual specs offered are ones users haven't experienced as of yet.

Throw a host of new features in the mix and a platform built for future upgrade capabilities, and you've got a lean, mean, graphics machine.

AMD's offering three different chipset options for the motherboards with FM2 sockets: the AMD A55, A75, and A85X.

These sets support AMD Memory Profiles which enable graphics memory to run at 1866 MHz with up to 266 MHz boost for faster performance.