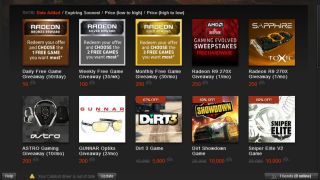 Doesn't give us points for playing Flappy Bird, though

AMD's latest incentive program is being interwoven into its existing app, which promises to reward PC gamers for some of the tasks they likely already perform when playing games.

The AMD Gaming Evolved app doles out points and eventually prizes for using AMD Radeon and AMD APU-based hardware and completing actions like optimising the image quality of a game and playing a game identified by the client.

The Windows-based app can be downloaded from the graphics company and social gaming-based network Raptr starting today.

Johnny, tell them what they've won

In total, the company says that the AMD-exclusive store has more than $5.5 million worth of merchandise on hand.

AMD isn't a stranger to offering incentives for using its hardware over its chief rival, Nvidia. The company has been running bundle programs that offer free games with graphics card purchases for several years.