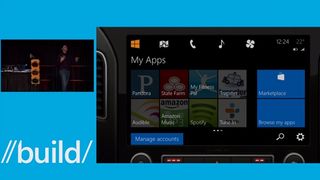 Windows Phone mirroring coming to a car near you

Microsoft has been making mobile-friendly in-car systems since before Apple's CarPlay was a twinkle in Tim Cook's eye, but now it plans to take the next step and bring Windows Phone into the mix.

At last week's Build developers conference, the company unveiled its Windows in the Car concept which will allow Windows Phone users to mirror the experience on their vehicles dashboard.

The concept, which is already being tested in some real-life cars, will allow users to access apps like Maps, Xbox Radio, Amazon MP3, Spotify and more.

Windows in the Car will allow users to make calls, see emails and messages and, judging by the video demo below, will allow drivers to access in-car settings like defrost.

The service is powered by Mirrorlink technology which has the support of auto makers like Volkswagen, Honda, Toyota and Citroen.

Current platforms like Ford Sync are already powered by a version of Windows to power their mobile syncing endeavours.

The video makes no mention of when the service will become available. However, it seems like Microsoft has set its sights on putting Windows Phone into cars, rather than doing back-end stuff for other platforms.

Check out the video and let us know your thoughts in the comments section below.