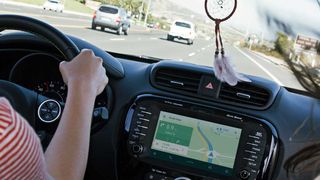 Google has officially announced the launch of Android Auto, and you won't need to buy a new car to make use of it. All you need is an Android 5.0-equipped smartphone and a compatible Pioneer head unit for your in-car entertainment system.

Although this means you can't just jump in your car and get started with Android Auto, buying a new head unit will at least be a fair bit cheaper than buying a brand new car.

Android Auto has been designed to allow drivers to safely interact with their smartphones while on the road. Devices can be connected to head units with displays, giving you access to Google Maps, Messages, Goggle Play Music, weather and other apps via a safe interface that can be used hands-free via controls in the steering wheel or through improved voice commands.

It's sort of like a super-charged sat nav device combined with a car entertainment system, and the aim is to turn existing vehicles into smart cars. The service will launch in the US, UK and Australia first, with other countries hopefully following.

You can check out Pioneer's Android Auto website to see which units are compatible, along with the features its partnership with Google brings.

Google has also revealed that it will be revealing more partners for Android Auto soon, so if you're not keen on getting a Pioneer system, you might want to hang tight.