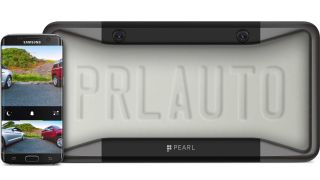 In a world of ever increasingly advanced vehicles, older models seem to be getting left in the technological dust. Pearl RearVision, a solar-powered license plate frame, hopes to change that by offering new car tech for those stuck in past models.

For $499.99 you can have a two-camera rearview license plate frameconnects via Bluetooth to an app on your smartphone. Simply connect the two devices and you'll be able to have rearview vision on your older car -- no wiring necessary.

Backup cameras create a safer environment for everyone, so much so, that the NHTSA has mandated all new cars come with standard systems no later than May 1, 2018. For vehicles that were made prior to that date, there is RearVision.

Unlike other backup camera license plate surrounds, RearVision charges its internal batteries by solar power cells in the frame. It charges while it's in the sun and has power for you whenever you need it, no changing batteries required.

RearVision employs two cameras for a wide-angle rear view of the car with object detection. The backup camera also comes with an OBDII adaptor that processes the video stream to provide audible and visual alerts.

The three founders of Pearl, including CEO Bryan Gardner, VP of Engineer Joseph Fisher, and COO Brian Sander, met each other in the halls of Apple, where they developed iPods and iPhones. Now, they want to revolutionize your drive the same way they helped expand the technological universe.

And they've got a pretty wide variety of cars that could use these enhanced license plate surrounds; an approximate 1.2 billion used cars roam the roads. With another two years until cameras are mandatory on all cars, that number will only increase.

While the license plate surround will work with any vehicle running an OBDII system, the phone app only works on Lollipop or newer Android phones and iOS 9 or newer Apple devices. Sorry, Microsoft Windows 10 Mobile or Blackberry users.

Interested shoppers can pre-order their Pearl system now with product expecting to ship in September. To see out what Pearl can do for your older car, check out their website at www.pearlauto.com.