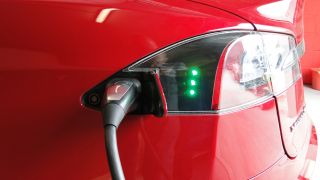 It will take you from the dealership to the casino and back...

It's all well and good owning an electric car, but it won't get you far if you don't have anywhere to charge it.

Fortunately, those clever chaps at Tesla have recognised this, so Sydney now has two locations for Tesla Model S owners to top up their juice via the company's superchargers. The charging service is free of charge and there's a promise of more locations to come.

This unveiling of the superchargers coincides with the opening of Tesla's first Australian showroom this week, in the northern Sydney suburb of Artarmon.

The showroom acts as the first of the two charging locations, while the second is the underground car park at Sydney's Star Casino. Each location offers five supercharger stations.

The chargers are capable of supplying a 50 per cent charge in 20 minutes, while a complete top up takes just under an hour.

According to Tesla, this is just the start of a much bigger roll out, with the US company reassuring Australian customers a network of superchargers is on the way.

Tesla aims to have supercharger stations at approximate 200km intervals connecting Melbourne, Canberra and Sydney by the end of 2015, with a further expansion up the east coast to Brisbane in 2016.