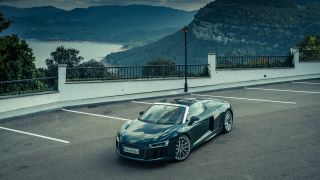 Audi is a car brand that’s seen quite a transformation over the last decade or so, shedding its slightly stuffy image of a car maker that builds solid saloons and estates in favor of a more desirable one thanks to a raft of new model lines.

The original TT played a big part in this, while the likes of the first RS6 estates, with their dirty great V8s shoehorned under the bonnet, were pretty much the quickest way to transport a family of four and their dog over long distances.

Then there’s Audi’s success at Le Mans, winning five times with the LMP R8 before ripping up the rule book and entering the diesel-powered R10 TDi, which won the endurance event in its first year in 2006.

That same year Audi took the wraps off its most ambitious road car yet, borrowing the name from its race-winning cousin to boot: the R8 supercar.

Cementing Audi's status as a premium car brand, the R8 represented the pinnacle of the company's engineering prowess, and now, 10 years on we have the second-generation model - it'll be coming to the US in Spring 2017.

But with the supercar landscape changing dramatically as hybrid technology is embraced, is there still a place for the likes of the £129,990 R8 V10 Spyder?

The star of the Spyder show is its hand-built, naturally aspirated 533bhp 5.2-litre V10 engine. This stunning piece of engineering shuns turbos and hybrid technology to propel you from a standing start to 62mph in 3.6 secs, and will push onwards to a top speed of 198mph.

Audi has employed the classic supercar trick of positioning the engine in the middle; as a result weight distribution has a slight bias towards the rear axle, which when coupled up with the R8’s Quattro all-wheel drive technology, should produce stunning traction and grip.

While those investing in a V10 supercar might not have fuel economy at the forefront of their minds, the engine features Audi’s advanced Cylinder-on-demand technology. This sees the engine management system shut down five of the 10 cylinders when you’re trundling along in traffic (or posing along the streets of Knightsbridge or Monaco) to improve fuel consumption, but within milliseconds of you hitting the throttle, all 10 cylinders will burst into life to give you the full force of that glorious engine.

While supercars of old had heavy manual gearboxes with just as heavy clutch pedals, not so the Spyder. With its seven-speed dual-clutch S tronic gearbox it's simply a case of pressing the throttle pedal and the gearbox will do the rest, while for those times when you want to move things along a bit faster you can pull up the right paddle behind the steering wheel to shift up through the gears.

Compared to the original R8 Spyder, the design has been sharpened up quite a bit, and it’s all the better for it. While it may not have quite the same in-your-face styling as some of its rivals, the Spyder’s understated and purposeful looks – enhanced by the addition of distinctive sideblades, which shove air into the engine, and make the car's midriff a little wider – give it a certain presence and drama, whether it’s parked up or going full pelt.

For purists, a cabriolet is always going to be seen as a compromise over a coupe equivalent – rigidity and stiffness are compromised by lopping the roof off, while the roof mechanism and extra engineering required to add the torsional strength lost by the roof all adds weight. But that’s to ignore the sheer thrill of having the roof down, and the howl of the V10 ricocheting off the surrounding buildings and straight back into the cockpit.

Audi’s done a stunning job here. The mix of carbon and aluminium makes the Spyder some 55% more rigid than the previous model, as well as being some 25kg lighter. Compared to its hardtop counterpart it’s only 125kg heavier, which may seem a lot, but it’s impressive given the level of engineering required.

The folding roof mechanism is a masterwork of mechanical dance, taking just 20 seconds from a single press of a button to reveal the sky, while if the urge to drop the roof is so great that you don’t want to stop (or, less thrilling, if it starts to rain), this can be done on the move at speeds of up to 31mph.

While it might not offer quite the same sense of occasion as slipping behind the wheel of a Lamborghini or Ferrari, the R8 Spyder's cockpit is still a very nice place to be, with lots of leather and carbon to deliver a very premium, high-end feel.

The R8 Spyder uses what’s been termed Audi Virtual Cockpit, shunning traditional dials for a customisable digital display. Rather than having a multimedia interface (MMI) in the central console and the instrument panel up front, the two are combined into one high-resolution display, with the choice of three views: classic, infotainment and sport.

Google Maps is built in for navigation, while it’s easy to partner your smartphone with the Spyder – provided you tick the Audi Smartphone Interface optional extra that is. This enables you to share mobile phone content via USB and display it on the MMI, either via Android Auto or Apple CarPlay. Another optional extra is the Audi Phone Box, which allows wireless charging simply by placing your phone on the storage compartment, as well as creating a wireless connection via the car’s aerial.

If you ever tire of the stunning soundtrack of the R8’s V10 engine, then you’re in for a treat with the Bang & Olufsen Advanced Sound System. It’s an optional extra that will set you back another £1,750, but you get yourself a 16-channel amplifier with 13 speakers dotted round the cockpit (including two in each seat headrest and a subwoofer in the passenger footwell) that will kick out 550 watts.

The sound quality is stunning – whether you’ve got the roof up or down, the clarity and depth are mightily impressive.

You’d think a £130,000+ V10 supercar would be intimidating to drive, but that’s not the case at all. With the roof up, the gearbox set to full auto and the Drive mode dialled into Normal or Comfort, you’ve got an incredibly comfortable and cocooned cruiser that will happily demolish those motorway miles, or be quite at home just pootling around town. Find a twisty A-road, drop the roof and change the engine mode to Individual or Dynamic, and the Spyder's Le Mans-winning DNA shines through.

Put your foot down and the Spyder surges forward, with the engine note changing from a deep rumble to a loud howl as it nears its redline. Flick the right paddle behind the steering wheel and the change is seamless, while the snarling crackle that greets this change of gear is incredibly addictive.

This level of performance should be terrifying, but the grip is staggering – the all-wheel Quattro technology that saw Audi dominate the World Rally Championships in the 1980s inspires so much confidence as you travel through a bend that you’d have to do something pretty dramatic to unsettle it.

With all this power you'd naturally want to be able to stop pretty sharpish, and the optional-extra ceramic brakes that our car had deliver incredible stopping power. They can be a bit snappy to start with, but once you’ve generated a decent amount of heat their stopping power is immense.

The Audi R8 V10 Spyder is an engineering masterpiece. Unlike some supercars that can be hard to live with on a daily basis, the Spyder is a true supercar that you can enjoy every day. It's comfy and quiet when you need it to be, but a flick of the switch will see it transform into a true howling and cackling supercar that will punch you in the back as you climb through the gears at a staggering rate.

The coupe may be lighter and just a bit quicker, but you’ll soon forget about that with the roof down and the sound of that glorious V10, just a couple of feet away, screaming through the rev range. The R8 V10 Spyder really does take your breath away.