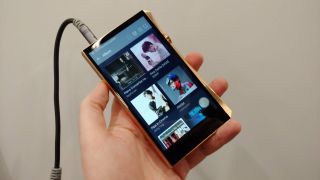 The convenience of a streaming service for your music is all well and good, but when it comes to quality, you still can't beat dedicated hi-res tracks if you're going all-digital.

Both are audiophile-grade devices dedicated to music playback at the highest-possible quality. And both are going to make your pockets bulge thanks to the chunky, angular designs with which they house their amps and capacious storage.

First up, and pictured up top, is the A&ultima SP2000, the company's flagship product. It's using Asahi Kasei DACs (AKM AK4499EQ) in a dual, mono setup, and can support playback of 32-bit/768kHz PCM and native DSD512 files. Power and volume on the angular player is handled by a chunky dial on the right hand side.

It's powered by an octa-core CPU, and has a healthy 512GB of storage space onboard – useful, seeing as hi-res audio files can quickly take up a lot of data space. Should you want to stream in rather than use your own side-loaded files, it'll have dual-band wi-fi onboard too, backed by a stereo antenna.

If you're after something a bit more affordable, and can handle the extra chunkiness that accompanies it, take a peek at the $1499 Astell & Kern Kann Cube. Building on the well-received original Kann, it's capable of twice the power output of its predecessor, with a new amp that strives to destroy distortion.

Two 8-channel ESS Sabre ES9038PRO DACs in a dual-mono configuration are onboard with hi, mid or low gain options, opting for a quad-core processor over the flagship model's 8-core variant. 3.5mm and 5-pin XLR sockets are both supported.

You'll get 128GB of storage onboard, expandable by microSD, and nine hours playback per charge from its 7400mAh battery. File support includes 32-bit/384kHz PCM and DSD256 while, as with the SP2000, there's support for a wide range of streaming apps including Spotify, Amazon Music, Qobuz, Deezer and the all-important hi-res supporting Tidal. Expect to see this onsale around the same time as the SP2000.