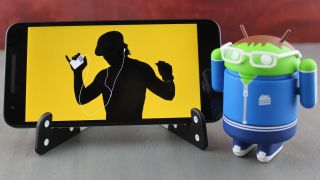 It was back in 2015 when Apple finally played nice and launched Apple Music for Android, with the app getting a makeover last year. Now, three years after launch, the Android version of Apple Music is finally getting support for tablets.

As discovered by Android Police, version 2.7 of the app, which is currently only available to beta testers, includes “performance improvements for images and audio playback”, the usual host of bug fixes, and “tablet support” in the changelog.

For most of the public, the current stable release available on the Google Play Store is version 2.6.1, which still features the classic collapsible hamburger menu. The new beta update eliminates this part of the interface for a bottom navigation bar.

With Android tablets not quite enjoying the popularity of the iPad, and the number of Android users subscribing to Apple Music likely quite low, this change may not benefit many people. However, anyone on a family plan with multiple devices across platforms might make good use of the changes.

This isn’t the first time Apple has played nice with third-party hardware. In September, Apple rolled out support for Android Auto, and only last week decide to played nice with Amazon to announce that Apple Music can be streamed on Echo speakers from December 17, 2018.