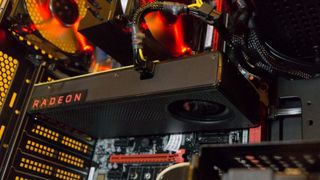 Just ahead of their anticipated, big reveal during the Siggraph conference in Los Angeles on July 30, marketing images of three of the expected AMD Vega graphics cards have allegedly leaked online.

That’s according to both VideoCardz and WCCFTech, the former of which claiming to have obtained images of the reference card (what third-party graphics card builders use to then produce their own versions) for the so-called AMD Radeon RX Vega 64 as well as its ‘Limited Edition’ counterpart. WCCFTech then went one step further to allegedly leak a marketing image of a ‘Liquid Edition’ Radeon RX Vega 64 shortly after.

Going off of these leaked images via VideoCardz, we can see that at least the standard-issue reference card will come with three DisplayPort – erm – ports in addition to one HDMI-out port. According to VideoCardz, the cards also employ two 8-pin power connectors. Also, you can clearly see that these two cards are fan-cooled.

Naturally, the alleged ‘Liquid Edition’ reference card shows no fans to speak of, rather two braided cables that likely contain the tubing to deliver the liquid pass-through throughout the card.

Furthermore, it’s interesting – and, frankly, odd – to us that the reference card housing design doesn’t seem to have changed at all from the previous one for the Radeon RX 500 series much less the 400 series.

So, either AMD is keeping it simple when it comes to its reference card designs or some or all of these leaks aren’t the real deal. Considering the two sources tout pretty solid track records when it comes to leaks, we’re thinking this case is the former.

This news follows reports days earlier of AMD’s alleged pricing of the first RX Vega cards in Swedish kroner, making it look as if the Red Team may not have managed to beat Nvidia on pricing this time around, at least at the high end. Regardless, we’re anticipating some awfully powerful graphics hardware from AMD on July 30 nevertheless.