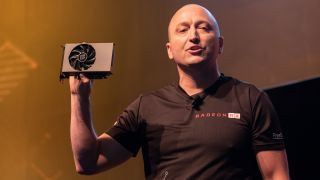 AMD Navi graphics processors (GPUs) have appeared on leaked benchmarks, though they appear to be engineering samples. Still, this leak could give insight to what we can expect when the GPUs launch later this year.

Especially now that Computex 2019, along with the rumored reveal of AMD Navi, is right around the corner, we're starting to see more leaks and rumors about the upcoming GPU platform.

This time around, these apparent leaked engineering samples have been unearthed by renowned leaker TUM_APISAK. The leaked specs don't paint that clear a picture of the AMD Navi "731F:C1" graphics processor – but it looks like this AMD Navi GPU will feature a 1,000MHz clock speed, 8GB of video memory (VRAM) and a memory bus clock of 1,250MHz.

Another supposed AMD Navi GPU, the "7310:00", was spotted in the Ashes of the Singularity benchmark by Wccftech.

As far as what this GPU is capable of, it's not looking super promising quite yet. In the GFXbench Manhattan test, the Navi 731F:C1 GPU scored under the Nvidia GeForce RTX 2070 by more than 10%. However, this could just come down to early and unoptimized pre-release drivers.

At this point, we know that AMD Navi is coming in Q3 2019, but we still don't know what it's going to be capable of. Because the GPUs leaked here are likely engineering samples running on pre-release drivers, the fact that it comes close to toppling the RTX 2070 is impressive enough on its own.

Keep in mind that the specs listed here are likely not final, and it's entirely possible that clock speeds – both on the core and the VRAM – will see a boost before release.

It will be interesting to see AMD Navi pricing, too, as that will paint a clearer picture of where the AMD Navi 731F:C1 and 7310:00 line up in the market. It's entirely possible that these GPUs are aimed at taking the Nvidia GeForce RTX 2060 on, as we've previously heard that the AMD Navi cards released this year will occupy the mid-range.

Either way, Computex 2019 will be here soon enough, so hopefully we'll get a clearer picture of what AMD Navi has to offer at the show.