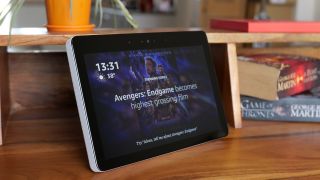 Following recent privacy concerns suggesting that Amazon employees may be listening to your recorded Alexa conversations, the online retail giant has announced new voice commands that will give users more control over their recordings.

In its newly launched 'Alexa Privacy Hub', Amazon states that users may now scrap their recorded voice history daily by saying "Alexa, delete everything I said today”. A second command, “Alexa, delete what I just said”, will roll out within the next month.

Of course, there are some necessary steps that must be taken before the commands will actually work: users must first access their Alexa Privacy Settings, click on 'Review Voice History' and flip the 'Enable deletion by voice' toggle to 'on'.

There is one small catch though, as enabling the feature will allow "anyone with access to your Alexa devices" to delete your voice recordings, which doesn't sound like a big deal to us.

Alexa device owners may also use the same page to access a drop down menu that allows them to delete voice data from specific dates or even their entire voice recording history – a much easier alternative to the previous method of deleting voice recordings one-by-one via the Alexa app.

While it's nice to see Amazon be more transparent about its practices and give customers more control over their data, we have to wonder whether it will be enough to assuage users' privacy concerns in the long run.