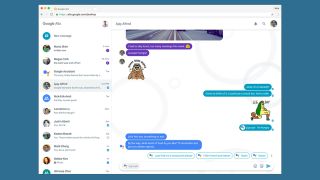 It's fair to say Google Allo hasn't exactly been a huge success since it launched last September, but Google isn't giving up on its new messenger baby yet: the app is coming to the web, according to a tweet from company exec Nick Fox.

The attached picture shows the familiar Allo interface, complete with Google Assistant bot, running inside a web browser. Fox said the image is a "sneak peak" and that the app is "still in development" so we don't know when we'll actually get to use it.

Whether or not a web launch for Google's newest messaging platform will be enough to get more people actually using it remains to be seen - while millions of users have at least given the app a spin, it dropped out of the top app charts on Android and iOS pretty swiftly after the launch.

Part of the problem is Google has so many different messaging products out there: it just updated its official Android SMS client, while Google Hangouts doesn't seem to be going anywhere just yet, and it has a separate FaceTime-style video-calling app.

There's nothing particularly bad about Allo, and it does offer some useful features through the Google Assistant integration - but it's up against a lot of other established messaging apps, and it doesn't yet support basic SMS functionality either.

At least we know Google is continuing to actively develop Allo, for the time being anyway. Maybe at the Google IO 2017 conference later in the year we'll get a better idea of Google's messaging masterplan - if indeed there is one.