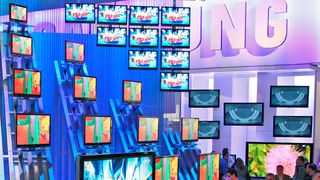 This year's show is the biggest ever. Join us

Next week sees one of the biggest events in the tech calendar - it's the International Consumer Electronics Show (CES), one of the key global events for new tech launches.

Expect new kit from the likes of Sony, Samsung, Panasonic, Asus and LG as well as huge amounts of news from every firm under the sun including Intel, Qualcomm, and more.

TechRadar is hitting CES harder than ever before this year, not only bringing in our biggest editorial team yet, but also participating as a Consumer Electronics Association Official Media Partner for the first time.

We'll be covering as much kit as is humanly possible. As well as all the latest news, we'll also be bringing you cutting-edge analysis of the show. And we'll also be giving you the benefit of our first-hand experience of the new hardware in hands-on reviews with thorough photography.

The show is simply packed with stuff, so to make things easier we've got two things for you – our CES 2013 hub page will carry a curated flow of the latest and greatest news and essential hands ons.

Then there's our CES channel, which will carry all of TechRadar's CES content. Last year we posted in excess of 100 stories - this year we'll be doing even more.

The show starts Tuesday, but the press day is Monday and we'll be attending major talks by vendors including Samsung, LG, Intel, Sony and others.

CES 2013 will take place over 1.87 million square feet at the Las Vegas Convention Center as well as at venues including Mandalay Bay and The Venetian on the world-famous Las Vegas strip.

3,000 exhibitors will be in attendance, marking the largest show floor in the event's 45-year history. For the first time in years, Microsoft won't be among them, having announced that last year was its last at the show. Apple is also a notable – but unsurprising - absentee.

The show has increasingly become a launchpad for phones and tablets, but one of the key growth areas in 2013 looks set to be automotive. A record number of automakers will exhibit at CES 2013, including Audi, Chevrolet, Chrysler, Ford, Hyundai, Kia, Lexus and Subaru, across more than 100,000 square feet of exhibit space.

Not only will TechRadar cover every nook and cranny of CES 2013, we're also revealing the winners of the TechRadar Best of CES Awards sponsored by DTS.

The awards are designed to honor products that really shine - the most innovative gadgets and technologies that showcase groundbreaking design, technology, and user experience across 15 different categories.

Join in the fun all next week on TechRadar and check out us on Facebook and Twitter while we're at the show.

Check out the TechRadar team while we're at the show