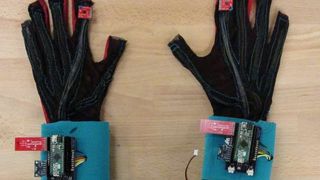 It doesn't look like much, but this could be a big deal

Sign language is an incredible tool, but it's one which many people can't use, which can make communication between sign language speakers and the rest of the world problematic.

But that communication barrier might soon be a thing of the past, as two undergraduates from the University of Washington have created a pair of gloves that translate sign language into text or speech.

Phys.org reports that the invention, dubbed 'SignAloud', consists of a pair of gloves containing sensors that record the wearer's hand positions and movements.

This data is then sent via Bluetooth to a central computer which works out if the movements match an American Sign Language gesture, and if so the word or phrase is spoken through a speaker.

Although this isn't the first sign language translation device it is one of the most ergonomic and could easily become a part of people's lives, like hearing aids and contact lenses are now.

Navid Azodi and Thomas Pryor are the students behind the invention and they won a $10,000 Lemelson-MIT Student Prize for it. The device already has the potential to be transformative for anyone who currently relies on American Sign Language, but in future it could presumably be made to function with other versions of sign language.

It could also go beyond just helping the deaf and hard hard-of-hearing community, with potential applications in other fields such as gesture controls, monitoring stroke patients during rehabilitation and improved dexterity in virtual reality.

At the moment it looks a bit too much look a prototype and its reliance on Bluetooth will limit the range it can operate under. But if SignAloud lives up to its promise it could be a household name in a few years.