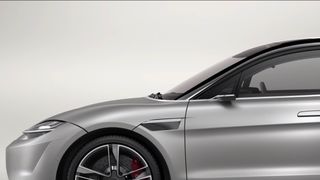 Sony gave us a rundown of everything that's coming in 2020 during its keynote event at CES, including introducing us to the new PS5 logo. However, it was something we weren't expecting that had everyone talking.

In the middle of his presentation, Sony CEO Kenichiro Yoshida had an electric concept sedan driven onto the stage to introduce the world to the Vision-S. It's the first prototype sedan to showcase the automotive technologies Sony has developed. The sedan itself was built in partnership with big names including Bosch, Blackberry, Nvidia and Qualcomm.

According to Yoshida, the Vision-S is fitted with 33 sensors both in and outside the vehicle. These have been designed to not only spot hazards on the road but to also detect driver fatigue with lane departure warning system (LDWS). It's possible that at this point the car might become autonomous, with the sensors aiding in self-driving capabilities.

The Vision-S also features Sony's 360-degree Reality Audio that will allow sound to radiate in all directions throughout the interior of the car for an immersive experience.

The dashboard, other than providing all the driving information you might need, is essentially a full-width display with a second panel available in the center console. If that wasn't enough, there are two touchscreens behind the front seats so the rear passengers can have their fill of all the infotainment the car has to offer.

The car is, of course, electric and is powered by a "newly designed EV platform" that, according to Sony, can be used to run other types of vehicles as well, including SUVs. However, no other information about the sedan's range or power has been revealed as yet.

In terms of design, the sedan looks like a classy, luxurious ride, although we couldn't help get RoboCop vibes from it – it's what we envision RoboCop would look like if he were an electric car.

The car is just a concept, though, and it seems highly unlikely that it will go into production. Instead, as Yoshida explained, it's Sony's way to showcase the future of automotive technology.