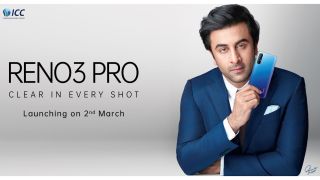 Oppo Reno 3 Pro has been confirmed to make it to the Indian shores on March 2. The much-awaited smartphone was previously expected to launch on February 27, but now Oppo has chosen a later date for the same.

The listing of Reno 3 Pro on Oppo's website and Flipkart have been updated with a new banner which reveals the launch date of the phone in India. The Reno 3 Pro was announced back in December 2019 in China and comes with 5G support.

However, in India, Oppo has confirmed that the Reno 3 Pro will be available with 4G support and not 5G. Apart from this, there are also indications that the Indian variant of the Reno 3 Pro might sport dual front-facing cameras, one of which could be a 44MP sensor, the biggest on the front of a phone yet.

Let's take a brief look at the Reno 3 Pro and what new features can we expect with the Indian version.

It is powered by Qualcomm Snapdragon 765G chipset in China but as the Indian version of the Reno 3 Pro will be limited to 4G connectivity, we believe it will be powered by a different processor. This is paired with upto 12GB RAM and 256GB UFS 2.1 storage. The phone runs on ColorOS 7 which is based on Android 10.

Coming to the cameras, the Reno 3 Pro has a quad-camera array on the back which consists of a primary 48MP sensor, 13MP telephoto lens with 2x optical zoom, 8MP ultra-wide-angle lens and a 2MP black and white sensor. On the front, there's a 32MP selfie camera, however, the Indian version is going to feature a dual punch-hole cutout for two front-facing cameras.

The primary front-facing camera is expected to be a 44MP sensor making it the first phone to feature such a high-resolution sensor alongside a 2MP depth sensor.

Oppo Reno 3 Pro is equipped with a 4,025mAh battery with support for 30W fast charging, thanks to VOOC Flash Charge 4.0.