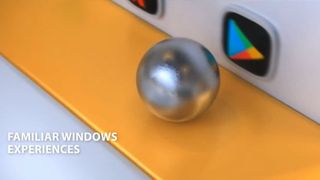 [Update: Asus has confirmed that this was an editing error, and is updating its video as we speak]

Would you like to get Android apps on your Windows 10 computer? There will be people who would, but unsurprisingly there's currently no support. However, is that about to change?

During the keynote presentation at Qualcomm's Snapdragon Summit, Asus unveiled the Snapdragon-powered NovaGo and with it ran a short video highlighting some of its key points.

That's all well and good, but eagle-eyed viewers may spot the Google Play Store icon appear at the end of a line of app icons including Twitter, Line, Facebook, Spotify and Netflix as a silver ball rushes past them.

Is it an innocent mistake, or is this a hint at something yet to be announced? See it for yourself below (blink and you'll miss it at 1h, 33m, 22s).

What is Microsoft saying?

We posed the question to Microsoft's GM of Windows Server, Erin Chapple who said "Windows does not support Android apps. We’re not focused on that today."

We also asked another Microsoft spokesperson about this, but they couldn't provide any insight, simply saying "we're always working with various partners."

There's no suggestion here then that Microsoft is working on any sort of support, but it’s also not a categorical no to anything happening in the future.

We have contacted Qualcomm, Asus and HP (the latter also has a Snapdragon powered laptop - the Envy X2) for comment on this. We'll update this article as soon as we hear back.