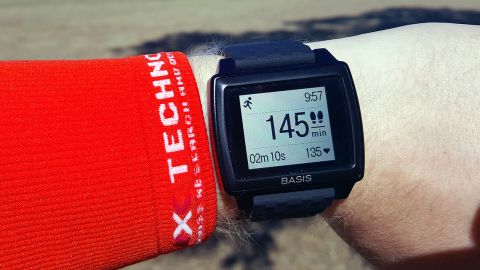 The main screen displays your daily totals of calories burned and steps taken, along with your average heart rate for the day. Tapping on any of your activities pops open a new smaller windowed view showing you a more detailed chart with a newly added line marking your heart rate. The app also fully integrates your activity details chart for the first time.

Habits - the Basis Peak name for activity goals - have also returned, and you can set different benchmarks like wearing the watch for 24 or more hours straight to prompting yourself for an evening jog. Users looking for a real challenge won't find it here, though, with many of the early goals focussing on wearing the watch and sleeping regularly.

The watch and app when synced both nag you with alerts to enforce your engagement, but otherwise are mute. Obviously the gamification here is designed to be light touch, but it does ring a little hollow.

There are now a LOT of alerts. In keeping with the highly customisable or overly complex (delete as you see fit) nature of the Basis Peak, once you've switched on alerts as a whole, you can pick from Basis alerts, Phone Calls, Email, Messages, Calendar and Instant Messaging. You can also reject phone calls from the Peak, which is pretty handy. However, messages come up in weirdly formatted text, with lots of added space, at least on my Samsung Galaxy S6, which usually forced me to whip my phone out immediately anyway.

It's a wise update and not too badly done, but I'm a little dubious about this semi-smartwatch approach. Having Bluetooth sync activated helped to drain a full S6 battery by lunchtime, and the value of a few alerts in the morning vs a working phone in the afternoon isn't a tough decision.

In short, if you've already splashed out on a Basis Peak, this is a handy update, but it's not a strong incentive to buy.

The Peak's sleep tracking abilities are a cut above some devices but not on the level of the Jawbone UP3. Yes, it fairly reliably detects when you go to sleep and when you wake up and tracks REM and deep sleep. However, again the Basis Peak tries to be too clever. An elevated HR while dozing can actually drop you into 'run' mode, leading to a ghost 3am jog being logged.

More prosaically, the Basis Peak is also not initially comfortable to sleep in, due to its size, although you'll probably get used to it. And as ever, for those not obsessed with the quantified self, the usefulness of this data is highly arguable, especially as the Peak has no insights to offer on it.

One other neat addition: there's also a stopwatch, accessed by swiping up on the main time screen.