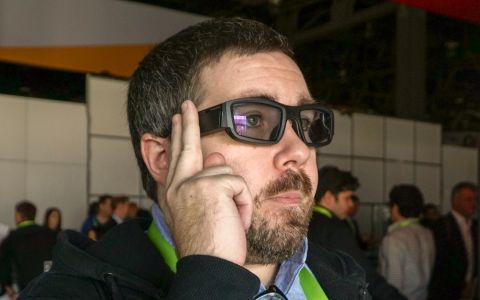 The Vuzix Blade sunglasses are excruciatingly close to achieving what Google set out to master years ago, and what Vuzix has been clawing at for even longer: truly augmented reality that not only keeps you connected but tells you more about the world around you. It’s time to get psyched about AR again.

At CES 2018, we’ve learned that we’re closer than ever to the type of augmented reality (AR) that we’ve long dreamed of since the dawn of sci-fi and, more recently, Google Glass. It’s all thanks to the Vuzix Blade AR sunglasses, which debuted at the show in Las Vegas.

Vuzix Blade is a culmination of Vuzix’s 20 years of work in the AR field for professionals married with Amazon’s first baby, Alexa. The two come together to deliver an AR platform – and product – that’s both fun and useful as well as awfully close to the ultimate AR dream: Terminator Vision (i.e. data about what’s right in front of our faces presented directly to our eyeballs).

Unfortunately, that price is going to keep this technology out of the hands of a lot of people. Then again, most emergent technologies start out this way. Just look at how quickly virtual reality headsets started out exorbitantly and plummeted down to us common folk.

Vuzix has clearly designed the Blade to be as accessible and comfortable as possible, but it still has a ways to go before this editor would readily wear the Blade regularly. And, no, it has nothing to do with the fact that I already wear glasses.

In fact, Vuzix will offer prescription options when the product is available for all to buy – a massive plus.

What we found a bit uncomfortable were the nose pads in use on the developer kit: they were a bit too sharp for our liking, though we generally prefer glasses (and sunglasses) that just have the bridge rest on our nose.

At any rate, the Vuzix Blade currently come in an all-black, plastic frame that doesn’t feel much heavier than a normal pair of glasses. That said, the design is a bit too, shall we say, professional? As sunglasses are almost as much about fashion as they are function, it’s going to be tough for most people to jive with this look.

But, again, this is the developer kit version. Lots can change between now and a final release, and what’s important right now is that Vuzix has the lightweight feel down pat.

Now, for the good stuff: we’re excited to report that the Vuzix Blade performs admirably even in its early state that only the press and developers will get their hands on.

Supporting all that is an 8-megapixel camera for image capture and sharing directly through the Blade interface.

As for inputs, the right side of the glasses is a capacitive touch surface, operating much in the same way Google Glass does: swipe backward and forward to navigate and tap to select items.

Of course, the Vuzix Blade gets its information from a Bluetooth connection to your phone, mediated by a free remote-control app, and has a Wi-Fi radio as well as a microUSB port for charging and a microSD card slot for storage.

All of these come together to display a card-based interface in the center of your visual range that displays information and graphics that are just translucent enough so as not to overtake your vision. When connected to your phone, the interface can display emails, text messages, social media and even turn-by-turn directions right into your field of view.

Swiping through the various options and notifications is super slick and intuitive, but we wish the visuals didn’t appear dead center in our field of view, or at least could be moved within the interface settings. Luckily, there’s plenty of time to improve this piece of the offering.

That said, the most powerful part of Vuzix Blade is Amazon’s Alexa digital assistant. Accessible via voice when a phone is connected (or when Blade is on a Wi-Fi network), the visual Alexa interface first seen in Amazon Echo Show is presented here whole cloth.

Ask Alexa when your next appointment is, and an Alexa Display Card will appear along with her voice transmitted through either headphones or a speaker connected to the Blade via Bluetooth. Running on Android, directions come in via Google Maps, while everything else comes in via your phone’s default apps for calendar, message and email notifications.

The voice response is as snappy as we’ve seen on other Alexa-integrated products, and brings a lot of important functionality to such a device.

Now, what Vuzix needs to do is bridge the gap between the camera and the Alexa platform to fully achieve the dream that Google Glass started. Then again, that’s Amazon’s problem as much as it is Vuzix’s – perhaps even more so.

Of course, the Vuzix Blade contains rechargeable, lithium-polymer batteries, but the company isn’t yet prepared to drop a figure when it comes to lasting power.

The Vuzix Blade sunglasses are excruciatingly close to achieving what Google set out to master years ago, and what Vuzix has been clawing at for even longer: truly augmented reality that not only keeps you connected but tells you more about the world around you. All that’s left is for Vuzix and Amazon to expand Alexa’s computer vision capabilities already at work in the Amazon Echo Look.

For now, the Vuzix Blade is all but 1:1 to Google Glass, if not better. Yes, the device itself could a bit more comfortable and more fashionable, and hopefully it will be possible to reposition the display portion of the Blade. Those are all fixable problems.

What’s important is to recognize just how very painfully close we are to fully functional AR that not only keeps us plugged in more easily but gives us information about what’s right in front of our faces. That’s now thanks in a huge part to Vuzix Blade.