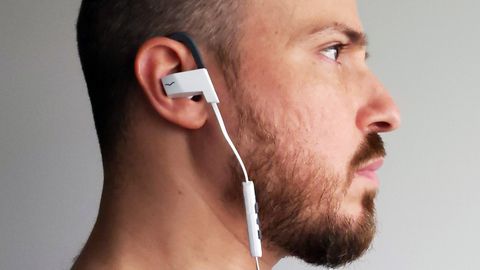 V-Moda officially goes the sporting route in its wireless lineup, but pulling out all the stops on comfort can't make up for lackluster audio playback.

It’s a little surprising that a brand like V-Moda hadn’t really tackled the world of sporty wireless earbuds until it launched the Bassfit Wireless late last year - the brand has been a mainstay in the world of wireless headphones for years and yet really never pursued the health and fitness fans out there.

That said, it was worth the wait.

While they're something of a departure from V-Moda’s usual design philosophy, they're less flamboyant than other models and instead focus nearly all their attention on a rock-solid fit.

Unfortunately, despite being great workout headphones for folks who can never seem to find good-fitting 'buds, the Italian company missed the mark on sound quality in the pursuit of creating the best-fitting earbuds.

V-Moda has done wireless earbuds before, only this time, the focus is on making them as difficult as possible to wiggle out of place once you put them on. It’s not often that both ear wings and ear hooks come together as a tandem, but there are ultimately three different fit options to work with.

One is with ear wings, one with ear hooks, and another with both. It is technically possible to remove both and not have wings or hooks at all, except that would defeat the purpose of keeping them in place. Many wireless earbuds with these accessories feel somewhat customizable, but this felt like there was no way to go wrong.

In the pursuit of getting the perfect fit, V-Moda includes eight pairs of ear tips in the box, ranging from extra small to large. There are two pairs for each size, which we thought was a nice touch. If one pair doesn’t cut it anymore, there’s a replacement ready to go. The wings only come in three sizes, with only the one pair of ear hooks.

Beyond that, there’s a small cloth carrying case and microUSB charging cable to go with the quick start guide.

To avoid tangling, V-Moda also flattened both the earbuds and charging cables. In addition, there’s a clip on the earbud cable to tighten the slack so as to avoid them dangling too much during any activity. Both earpieces attach to help keep them together when not in use.

Last but not least, we should note that V-Moda declared the Bassfit Wireless to be sweatproof and “weather resistant” but also made clear they aren’t for swimming. The key is that the resistance to sweat. Without a pedigree in making headphones for running and workouts, V-Moda had to prove their worth here - and, thankfully, a two-layer nanocoating is indeed resistant to perspiration in impressive ways. We still wiped them down to keep them clean, though we didn’t always have to.

If your regular earbuds are often dropping the connection in a crowded area like your local gym, you'll find a lot to like about the perfectly stable Bassfit: We went over 30 feet away and had no problem maintaining a solid connection. Dropouts were pretty rare under varying circumstances, giving us confidence every time we put them on to listen to music or handle phone calls.

The Bassfit Wireless immediately go into Bluetooth pairing mode upon startup. Thereafter, holding the power and volume down buttons simultaneously will do it again. Tones indicate a successful connection, and we never had a problem getting up and running. In fact, we were able to connect two devices at once, something potentially useful for carrying work and home smartphones together. Or a phone and a tablet.

The inline remote has a built-in mic with power and volume buttons, along with a microUSB slot to charge the battery. Controls are slightly different compared to other, similar wireless earbuds.

Pressing power once plays, pauses, answers and rejects calls. Double-pressing it skips a track, and triple-pressing repeats. Holding the power and volume up buttons for two seconds triggers Siri, Google Assistant or Bixby.

Phone calls sound through both earbuds, and we found very good call quality on both ends. A few callers weren’t even sure we were using a headset.

Android and iOS users are also covered, thanks to support for both the AAC and aptX Bluetooth codecs, ensuring iPhone, iPad and Android devices get higher quality audio streams.

Audio quality, adversely, is something of a mixed bag. We should stress that finding the right fit is paramount to getting the most out of these earbuds sonically. Without it, there's just no way you'll hear the headphone's expanded bass frequency.

That said, even with a good fit we had to crank up the volume to really feel it, thereby affecting battery life. Highs and mids were very neutral, emphasizing that the bass was going to be the dominant part of the spectrum. This was most obvious when in quiet confines, even more so in noisier environments.

We tested this with a variety of tracks playing in a number of different places. Queen’s Under Pressure is a bass-heavy track that came through reasonably well, while Warren G’s Regulate also sounded decent enough. We got similar results with Aerosmith’s Walk This Way and Tea Party’s Black River.

But, no matter what we played we weren’t especially blown away. It wasn’t as easy as it should’ve been to hear the bass come through when tracks had plenty of it. Moreover, there could be a fair bit of ambient noise seeping in to muddy things further. Runners might like that for safety reasons, but we’d argue that’s easy to accomplish by just putting on a smaller size tip.

If there's a redeeming factor here, it's that V-Moda put 10mm drivers in these buds, so there’s some power under the hood. Despite a sturdy fit that didn’t slide out of place, the soundstage’s flatter output is serviceable, not special.

In terms of battery life, V-Moda rates the Bassfit Wireless at 11 hours per charge, which we never quite hit because of how we had to routinely raise the volume. Still, we did well, getting from nine to 10 hours consistently. Even better, we could get a good 2.5 hours of use from a 15-minute quick charge — perfect for a run or workout.

For a headphones all about fit and longevity, the V-Moda deliver. There are a number of eartip options in the box and while we found the headphones a bit fatiguing after 30 minutes of use due to their tightness, you certainly won't have to worry about them falling out. We have similarly good things to say about their  sweatproof and “weather resistant” coating, and battery life.

But, at $130 (around £99, AU$180), V-Moda’s Bassfit Wireless are a middling entry into a crowded market, offering more fit options than others, but never delivering with its audio performance. An app with an EQ would’ve been a nice way to tinker with that to squeeze more out of them.

In the end, we’re left with an uneasy feeling about these earbuds. They’re not bad, yet we can’t shake the thought that V-Moda could have done better.