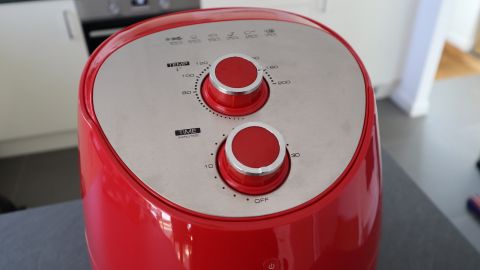 For £70, you get a quiet, easy-to-use and stylish machine which, on the whole, cooks tasty food with minimum fuss.

Swan has been in the cookware business for a century, selling all sorts of kitchen appliances from blenders to mixers, slow cookers, and more, in a variety of colors and for relatively cheap. These appliances have largely failed to meet the mark in previous tests, though, consistently scoring poorly and proving that you get what you pay for.

Its air fryer is an exception.

As the quietest air fryer we’ve ever used, the Swan 5L Manual air fryer offers a large capacity in a compact shape, favors easy-to-use dials over digital controls, and cooks decent-tasting food, albeit sometimes with a level of inconsistency.

It’s not perfect, but at this price and for its capacity there are few rivals that top it. You can read more about how it stacks up against competitors in our best air fryer group test, but read on for the full low down on the Swan 5L Manual air fryer itself.

The Swan Manual 5L air fryer costs £70 (around $90 / AU$130). That's a very affordable price for an air fryer with a feature set like the Swan's, though we've found even cheaper products, like the Wilko 4L air fryer, to perform even more impressively.

In a sea of digital, black air fryers, Swan’s Manual model stands out. Available in red, cream or black, it has a somewhat retro design and this is enhanced by its manual controls. Instead of having to decipher what a variety of buttons and screens do, only two dials on the Swan air fryer sit between you and tasty food.

The top dial controls the temperature, up to 200-degrees Celsius, while the bottom dial lets you set the time up to a maximum of 30 minutes. The Swan Manual air fryer’s five-litre bowl slides out from the bottom of the fryer and this large capacity holds enough food to easily feed a family or make a batch of chicken wings or other hot snacks for party guests.

While it doesn’t have the pre-programmed settings of many of its digital competitors, meaning it fails to offer one-button cooking, it does show recommended temperatures and times for different food choices printed on the fryer, above the dials. And because the dials are reminiscent of how you’d use a regular oven, they’re incredibly intuitive to use so manually setting the fryer takes roughly the same time as it does to find the equivalent digital program on other models. The closest rival, in terms of design, to the Swan Manual is the glossy black Wilko 4L model, which is among our favorite air fryers.

The Swan Manual is not what you would call a small air fryer, and its red color can be rather imposing – meaning it won’t be to everyone’s taste, nor will it suit the smallest of kitchens. Yet it does manage to cram in a large capacity, extremely quiet fan, removable basket and safety features into a relatively compact shape when compared with other fryers with this capacity.

When the Swan Manual air fryer gets the cooking time and temperature just right, and just the right amount of food is placed inside it, it produces standout food. It’s capable of making crispy chips with fluffy centers, and moist chicken wings with delicious skin. However, this performance is inconsistent.

From a single batch of chips, some were up there with the best air-fried chips we’ve ever eaten while others - presumably those which had been sat in the center of the pile – were soggy. Similarly, it has the skills to make restaurant-worthy chicken wings, but only those which sat on the outer sides of the basket made the grade. Having to limit how  much food is in the bowl or basket to ensure an even bake negates having the larger capacity, to an extent, and this is a shame because the Swan is clearly capable of greatness. It’s just a little hit and miss.

It should also be noted that, like the Wilko 4L air fryer, the Swan 5L Manual’s timer only lasts 30 minutes. This should be plenty of time to cook the majority of food you’ll be making in an air fryer, but this timer limits the fryer’s versatility a little. You can’t use it to cook a chicken, for instance, without manually resetting the timer halfway through and this is a minor, yet noteworthy point.

While £70 may seem steep for an air fryer that’s considered to be cheap, its best-selling, similarly performing rivals cost in excess of £100 / $120, especially those that offer the same capacity as Swan’s model. This £70 gets you an incredibly quiet, easy-to-use and stylish machine with a largely great performance, and is a fryer that will suit most kitchens and most cooking abilities.