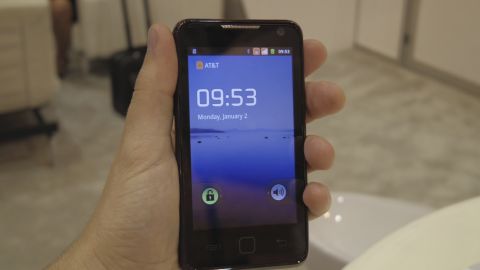 When we showed up at CTIA 2012, we had no idea what Unnecto was, but their folded phone brochures littered the show floor and media room, so we just had to find out what they were about.

For the most part, Unnecto sells cheap, unlocked GSM phones with their own Unnecto OS. However, they have two Android offerings, and the Quattro definitely has something to offer.

It's first trick is functionality as a dual-SIM phone - meaning taking calls on your work number and your home number can be done through the same phone.

The 650Mhz processor isn't going to exactly tear through complex processes, but it didn't feel sluggish in our time with it.

The plastic back feels expectedly cheap, and it's obvious the design is one of the steeper corners cut. It has a large rectangular home button that looks remarkably Apple-esque.

It comes with a slightly tweaked version of Gingerbread and with the weak processor, we don't expect we'd much like Ice Cream Sandwich even if it was installed.

The Unnecto Quattro will be releasing in coming months and cost less than $200. The official line was "between $150 and $200," which sounds like an absolute bargain for the dual-sim wielding niche.