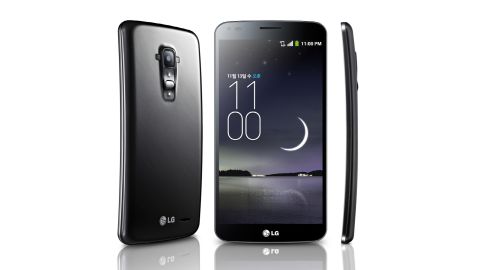 Real phones have curves. Or something like that. And with the LG G Flex, there is certainly no shortage of curves: around the edges, its packaging and especially the entire phone itself. If you're looking for something different, something that stands out against the rest, look no further.

Thanks to flexible display technology, we'll soon be seeing more curved devices and wearable gadgets and gizmos. In some cases, it makes perfect sense - like wristwatches or any other wearable that wraps around you or parts of your body.

On the other hand, we have to start questioning its use in devices that have always been flat, like smartphones and TVs. What benefit, if any, does a curved display have in these cases?

Our instincts tell us there really isn't much of an upside. We've become so used to living in a flat-screen world that introducing curved displays would garner Christopher Columbus-like reactions. Curved?! Nonsense! Except that was a myth.

First, let's make one thing clear about the LG G Flex: It is a phablet more than just a smartphone, with a display six inches on the diagonal. It's huge, like the Nokia Lumia 1520, but its gentle curve makes it somewhat easier to hold.

However, with its size come some benefits, like better viewing for videos and photos. A bigger phone also means, presumably, a bigger battery, so you'll get through your day with a more peace of mind.

In fact, LG claims that the G Flex will get two to three days of mixed use, but more on that later.

So, is there a reason for you to buy a large, curved smartphone? Let's find out.

(Note: We are using a Korean version of this smartphone loaned to us by LG because the device is not yet available worldwide, and LG was unable to disclose whether it will hit U.S. or European markets.)

The LG G Flex is large, there's no doubt about that. It's a six-inch display with a 700mm radius of curvature from top to bottom, which LG says is just the right amount of curvature for viewing, holding, manufacture and so forth.

The display is 720p, which isn't the sharpest on the market by any means, but LG says it's because it was the only way to get the RGB stripe on the curved display without resorting to PenTile for higher resolution.

At any rate, the display looks nice enough, but for a device this large, you can definitely tell that it isn't as sharp as the Nexus 5 or HTC One. It also has a strange, matte quality to it: it looks like it has some kind of grain or noise like you'd find on a photo shot with film or high ISO digital. Except it looks a lot more like color noise than luminance noise. In some cases, it's quite pleasing and somewhat cinematic, but other times you wish the images and video were cleaner and sharper.

It seems like that noise may also be a quality of the coating of the display, just underneath the glass. Either way, it's very noticeable.

Above the display is the earpiece and front-facing camera along with ambient light sensors, and at the bottom edge of the phone is the microphone, charging port and 3.5mm headset jack. The top edge has another small microphone, presumably for helping in noise reduction.

On the back is a 13MP camera with flash, and the volume rocker and power button, placed just like it is on the LG G2. We're not too fond of this particular design, but we've learned to live with it.

At the very base of the phone, there is also an antenna that you can pull out for watching TV, though we were unable to test this feature in the U.S.

LG added a 3,500 mAh battery for the G Flex, which is higher in capacity than the LG G2's stellar 3,200 mAh unit. We've had limited testing with the G Flex's battery life so far, but we expect it to outperform the LG G2 by a good margin.

The backside itself has what LG calls a self-healing coating. When you feel it, it feels like the thick, transparent plastic you'd find in some packaging materials. LG tells us that its molecular structure allows it to recover from scratches from springing back. But common sense makes it feel like it's just springing back from a dent, rather than a true scratch.

We scratched the back lightly with the corner of a USB jack, and in 24 hours it has yet to recover. The scratches are superficial and light, rather than the deep scratches you'd expect to be permanent.

The most noticeable feature of the LG G2 is its curved design, and that's really the whole schtick for this smartphone, too.

Without that soft curve, this would likely be just another phablet on the market from LG. The curve happens from top to bottom, unlike the Samsung Galaxy Round prototype, which curves from left to right.

As far as we know, the phone only comes in a dark gray or silver color, but that could change in the future.

Otherwise, you can picture the G Flex as an oversized G2 with a curve and you wouldn't be far off.

The back buttons are also going to be a trend from LG moving forward, as we were told during our meeting that it has to stick with something to distinguish it from the rest of the smartphone makers out there.

Long pressing the volume down button activates the camera, just like it does on the G2. The power button glows as a notification light if your phone is facing downward on a table so you know when you have missed messages or notifications.

Beside the camera, opposite the flash, is an IR blaster, though we find very limited use for those when we do review new smartphones. However, if you like controlling your TV or music player from afar and it supports it, having the IR blaster is convenient.

One last word on the not-so-self-healing coating: it tends to attract dust and dirt, and it sticks to it as if it's statically charged. You can wipe all you like, but it seems difficult to get the stuff off, especially if it's been in your pocket or bag for a while. It'll eventually all come off if you wipe it well enough, but will attract dust and dirt once again as soon as you put it away.