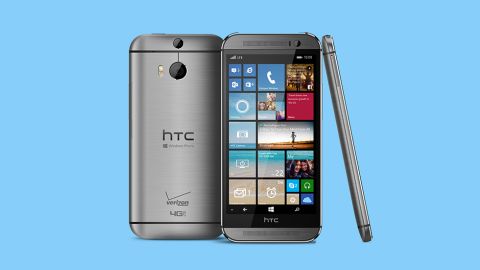 HTC One M8 for Windows Phone

The HTC One M8 for Windows is a solid Windows Phone 8.1 flagship.

How does the HTC One M8 for Windows Phone feel in the hand? Well, exactly like its Android counterpart. It's the same phone. Same dimensions, same cameras, same internal parts, same everything. The only difference is Windows Phone 8.1.

With that said, if you haven't already toyed with the HTC One M8 in person, and this is the first time you're hearing about HTC's flagship phone, here's a link to our review of the Android version of the One M8;

It's a beautiful piece of hardware. HTC took great care in making sure the design gives a seamless experience in handling the phone. It's weighty, that's for sure, but not so heavy that it would annoy you when it's in your pocket or purse.

The battery is the same 2,600 mAh unit found in the Android version, so you should easily get all-day battery life.

Cameras are the same, too. On the back is the 4MP Duo camera setup, so you'll get access to features like UFocus, which allow you to take photos and select your area of focus later.

Spec for spec, the Windows and Android versions of the HTC One M8 are exactly the same.

Here's where the big difference is. The only reason to buy this phone is if you want to own a Windows Phone device.

Maybe you've already invested in the Windows Phone 8.1 ecosystem, or maybe you want to try something new. Either way, this is the distinguishing feature of this phone.

Windows Phone 8.1 is incredibly easy to use as you have one home screen with customizable Live Tiles, and the other screen is a list of all your apps and settings.

App selection isn't as rich as what you'd find on Android or iOS, but Windows Phone apps are getting better. The way apps behave are a little different, too, but you'll get used to it if it's your first time on Windows Phone.

One of the hotter features of Windows Phone 8.1 is Cortana, or Microsoft's personal assistant. We did a video comparing Cortana with Google Now and Siri, and Cortana held her own. She often beat out the other two with certain requests.

Cortana will certainly improve over time, as will Windows Phone 8.1.1 (the version found in this device).

The difference in verdict between the HTC One M8 and the One M8 for Windows Phone will come strictly down to the platform on the device. We love Android, but we can't say the same for Windows Phone, which has significantly smaller market share.

Windows Phone 8.1 is good, especially now that it has Cortana and a unified notification panel, but its apps still need a little more time to get to where Android and iOS are.

With that aside, the hardware is excellent. If you've already read our HTC One M8 review, you'll know that we think the device is great. Its design is beautiful, the display is very sharp and battery life is great.

Moreover, it retains all the cool features found on the Android version, like BoomSound and the Duo camera with UltraPixel sensors.

It's available for Verizon Wireless in the US only, but at $99.99 at an introductory starting price, it's not so bad. Especially when you consider the quality hardware you're getting if you already had your heart set on Windows Phone 8.1.

Depending on how well received the One M8 for Windows is in the States, we could well see it rolled out to other countries, but HTC is staying quiet on any potential plans for now.