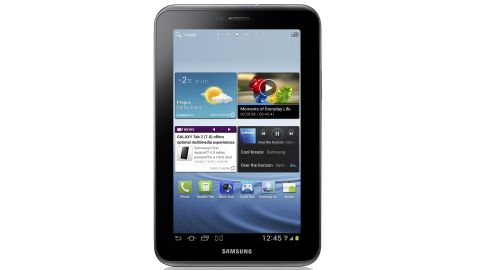 Samsung has fought hard to make the Galaxy Tab 2 7.0 compete as a strong rival to both the Amazon Kindle Fire and Apple iPad based on size, price and features.

Android 4.0 Ice Cream Sandwich is a great operating system, which makes a tablet like this easy to recommend, and has helped Samsung build a strong contender in what could be a hotly contested space.

That doesn't mean we're going to let it off the hook, however. The disappointing screen, unrefined TouchWiz experience and dull response to your finger make this a contender, but not a champion.

There are plenty of sub-£200/$250 tablets around now, but few have the pedigree of the Samsung Galaxy Tab 2 7.0. It's a fully-featured tablet, available on a budget, and that's been missing from the Android roster for a while.

We love the 7-inch size of the Samsung Galaxy Tab 2 7.0, and it really was pleasing, enabling us to watch movies and play games where we felt our iPads and Asus Transformer Pads were just too big.

Media handling was fantastic, and the ability to drag and drop videos, music and pictures, and just enjoy them wherever you are is still one of Android's strong points, and long may it continue.

As devices mature, it's becoming clear that Android Ice Cream Sandwich is a fantastic OS, and it genuinely lifts the tablet experience to a level that can compete with the iPad. The extra features feel right at home on the Samsung Galaxy Tab 2 7.0, and make for an absorbing experience.

Throughout this Samsung Galaxy Tab 2 7.0 review, we've picked out a number of gripes that detract from what is a solid device. It's designed to be low-cost, so corners will be cut, but some areas stopped it from being a real winner.

TouchWiz is a good overlay on most devices, but here it felt vanilla and cold. We'd much rather have seen a plain Android 4.0 Ice Cream Sandwich interface.

The screen was dull, lifeless and unresponsive, which made using the browser on the smaller screen difficult. This was also the case with reading websites, which was less comfortable on the Samsung Galaxy Tab 2 7.0 than on bigger 10-inch tablets.

Battery life is also slightly suspect - we'd have hoped for more when the screen is that much smaller than the larger tablets out there.

If the idea of a capable, portable, fun and comparatively low cost tablet appeals enough to you to make you part with £200/$250, then this is your tablet.

However, those who strive for the best experience, the sharpest screen and the most slender, curvaceous build will see that Samsung has cut corners.

It has kept costs down to offer something affordable to recession-hit customers, and still make a margin for itself, and to be honest, we don't blame it one bit.

Samsung just has to hope that Apple doesn't compete in this space with an iPad Mini, or we could see a case of history repeating, and end with total Cupertino-based domination of every form factor.