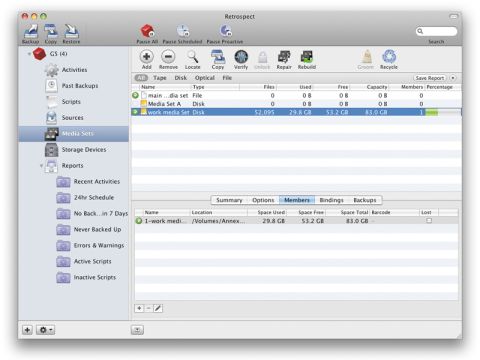 Media sets can be set up and inspected, organised, verified, repaired and rebuilt with ease

Retrospect 8.1 requires dedication to use well, but it is a superb backup and archive solution

EMC Retrospect, once the last words in backup for the Mac, has been pretty much out of the picture for years. Thanks to problems in the early days of Mac OS X, the once all-powerful utility fell into disfavour.

Fast-forward to 2009 and most Mac users reach for Time Machine, SuperDuper or other tools for their backup needs. So what does EMC Retrospect 8.1 offer that could make someone switch?

Retrospect is not simply a solo backup program, it is a tool for safeguarding data from multiple networked machines to multiple storage destinations, from hard disks and DVDs to all manner of tape backup media.

This is what's called enterprise-level backup, which is good enough (and then some) for IT departments managing large corporate networks. All very impressive, but is it any use to the rest of us?

Well, if you have more than a single Mac to back up, want to schedule, manage and perform the process intelligently across networks and perhaps use multiple media types including tape, then Retrospect is still top of the list.

If you've used Retrospect in the past you'll notice some terminology shifts, but nothing too jarring. This is all documented in the Getting Started PDF, a worthwhile document for new and old users alike.

When choosing locations for media sets (where backup data is to be stored), we found that Retrospect wouldn't allow us to use our USB connected backup hard drive, although it would let us include it as a source to be backed up. This invalidated one media type during our tests, but it was able to work with others.

SCRIPTS: Scripts allow you to schedule different types of back-up operations depending on what you want to do

Backing up a client doesn't put noticeable strain on its performance. Good practise dictates that backups happen when the Mac isn't used, but Retrospect can take this in its stride.

The scanning process where it builds its initial picture of everything on the source volume is lengthy, so don't expect the immediacy of a Finder-style drag and drop.

The software prefers to know about everything first and then check items off as it goes, and this kind of diligence takes time. Restoring data from a media set is as simple as it has been in the past, with a slightly cleaner feel to the interface and process.

You can browse a media set directly, trawling through a hierarchical list view of the complete volume, or use search features to filter for the items you need and have them restored directly. Retrospect remains relatively complex for new users; this is serious software, so you need to be prepared to put time into setting it up.

The interface presents things clearly; it is just the disparate nature of juggling scripts, sources, media sets and storage devices that can befuddle. The bottom line Retrospect is back, and it is more capable than ever.

It is still daunting to new users, and it is overkill if you have a single Mac to back up or whose needs are met by Time Machine's hands-free approach. But if you need more control, scripts, and so on, the reborn Retrospect is the business.