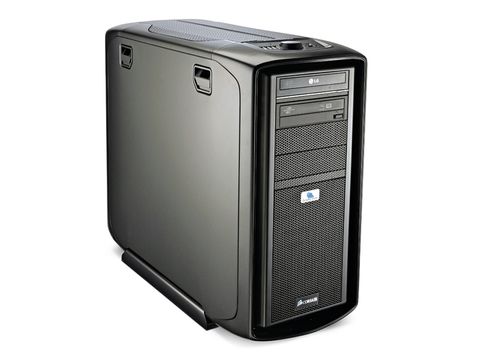 A powerful beast - but is it too powerful?

The cutting edge hardware and stellar (theoretical) performance has us very excited.

Some fantastic gaming PCs have entered the market recently. The excellent value and performance offered by Intel's i7 2600K chip has caught the eye of a fair few budget system builders.

More often, though, the higher end builders see the potential to spend the money saved on the expensive i7 990X chip, now slightly redundant thanks to Sandy Bridge, on other key performance areas. The Dino PC Evolution 2600K OC has been created with this ethos.

At £1,799 it's a no-compromise performance build, but still holds a thin veneer of affordability for the enthusiast. The ubiquitous 2600K is present in this system, overclocked to a whopping 5GHz and strapped to the Corsair Hydro H50 CPU cooler – all's well there, then.

It's the highest we've seen the 2600K clocked out of the box, so some serious kudos is due to the mad scientists at Dino PC. Real-world performance is just staggering. Applications load and perform tasks before you even think about clicking on them. Well, almost.

If this is what is possible with the H50, what clock speeds can the 2600K handle with an even mightier cooler, such as the Corsair H70?

It's not just the CPU's chill that catches our eye though. Airflow is a serious consideration here too – the new feature-rich Asus Sabretooth P67 motherboard included is covered in "TUF thermal armour", a membrane designed to direct hot air through special airflow channels. This hot air is chucked out of three gigantic case fans, the power of which can either be controlled by a dial on the front of the case, or handled automatically by the TUF thermal radar.

Several monitors on the board itself keep an eye on temperatures in crucial areas and change the fan speed accordingly. You can also mess about with the settings via the bundled software. Put simply, it's dead good.

The motherboard also packs six USB 3.0 ports, front and back, and four SATA 6Gbps ports. Y'know, for plugging things into and watching files whiz about. Incidentally, the case dial also serves as a decoy for the world's hardest-to-find 'On' button, occupying a tiny corner of the Corsair 600T chassis.

The big cooling issue in this case, though, is the graphics card. Occupying the PCIe slot is none other than the GTX 590, Nvidia's latest dual-GPU 3D card. It's fantastically expensive, fantastically powerful and runs fantastically hot.

Two of the GF110 chips, that also power the GTX 580, sit on one piece of silicon between just one fan. They're clocked down from the GTX 580 iteration, but still the board's packed with the same number of shader and CUDA cores. All that transistor activity generates some serious heat – around 86˚C under load, we found. It's hot, but not dangerously so. Our reference GTX 590 got as hot in our open test-bench and we've seen plenty of single-chip discrete GPUs reach similar temperatures.

Given the two chip, one fan arrangement of the GTX 590 we were particularly interested to see the system builders' approach to keeping things cool. And Dino PC hasn't slipped up, as far as we can see. Ok so don't store your fresh meat and fish next to the Dino PC, but all components considered, temperature levels are handled acceptably inside the case, thanks to a considered airflow from motherboard to case fan.

The only component sans fan in fact is the RAM, which is only slightly disappointing in a build of this price. If we're picking nits, the 600T chassis doesn't have as many integrated fans as some. CoolerMaster's Haf X stands out as one obvious airflow behemoth to soothe such a powerful 3D card. You could also cite watercooling as the way to go in a high-end rig like this, but realistically that's likely to push costs north of £2,000.

That the Nvidia GeForce GTX 590 is in this machine at all is a surprise – going blow for blow with AMD's dual-GPU Radeon HD 6990, this is ostensibly one of the most powerful graphics cards available.

At least that's what Nvidia is saying. Given that it's a recent release, to find it sitting comfortably in a sub-£2,000 PC when alone it retails for just under £600 is again testament to the Intel i7 2600K's value.

As a result of such monstrous hardware, there isn't a game or application this system can't handle with aplomb. It produced some of the fastest benchmark results we've ever seen, and as tech geeks we just love seeing a machine that can handle Metro 2033 at huge resolutions without a stutter. Gert lush, it is.

The GTX 590 is essentially two graphics cards in one, and so produces SLI-like performance levels from one board. This is the key to the Dino PC's much higher frame rates. Of course, that righteous overclocking of the CPU from 3.4GHZ up to a nice round 5GHZ doesn't hurt either.

There's some quality cooling on this rig, so overclocking the graphics card isn't an insane idea, should you want even more frames. With these base performances, you'd only be overclocking for bragging rights though.

But how much do you really need all that power? To put it another way, how much of it is surplus in today's – and possibly tomorrow's – games? We hope developers get bored of designing DX9 games for cross-platform releases and concentrate on pushing the boundaries of the PC, as Crytek once did. But for now the Dino PC,for all its lightning componentry, will play most releases just as smoothly as a £2,000 system.

We sang the collective praises of Scan's 3XS Vengeance and the Palicomp Phoenix Hydro X as they arrived in our office in recent months, for successfully pairing the Intel i7 2600K processor with graphics cards that'll handle any application with frames to spare.

Well, the Dino PC Evolution 2600K OC trounces them both, although admittedly it's more expensive than either. For now, it's the optimum CPU-GPU combination if we're talking performance rather than value.

Having the Nvidia GTX 590 occupying just one PCIe slot instead of two hot cards in SLI or CrossFireX not only aids airflow but opens up multi-GPU solutions further down the line, should you find a spare £600 down the back of the sofa.

Crucially, though, all that extra performance only becomes relevant at huge resolutions of 2560 x 1600 and above, and in particularly demanding games. If you're not going to play Metro 2033 on a 32-inch screen, there's no practical performance benefit in this system over the other aforementioned machines.

There's a lot to love about Dino PC's Evolution 2600K OC. It's greyhound-fast, well-built and stylish. Unusually stylish for a high-end games machine, actually. It carries a self-assurance beyond the Westwood-tricked-out neon rigs it's competing against, and runs very quietly.

The price is also reasonable given the brand new technology within. The only caveat, then, is whether that hardware will ever get worked hard enough to really justify its presence.