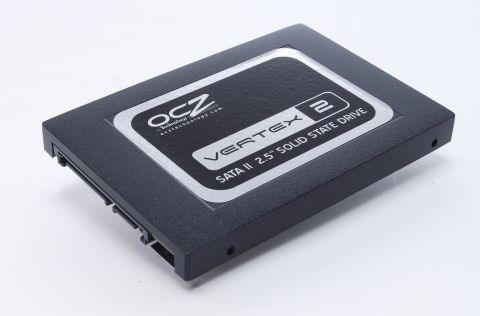 Excellent performance and value, even if the smart money is on the 60GB version.

OCZ's latest iteration of the Vertex 2 comes with another 20GB of space from a new Sandforce update.

You know how it is. You wait for one genre defining new bit of kit to come along, and suddenly three appear at once. OCZ's Vertex 2 arrived in the TechRadar labs armed with a new controller chip that promises to revolutionise SSD behaviour, only to be followed rapidly by Corsair's Force F100 and OCZ's own Agility 2.

Both of which also boast the same advanced controller that promises to revolutionise... well, you get the idea.

The controller in question is Sandforce's SF-1200.

It's different because of the way it handles write instructions to the drive pages. In most SSDs, writing data is slowed down because the controller needs to erase information already in the target page, a technical hangover from traditional drive management.

The SF-1200, however, makes heavy use of the TRIM technology built into Windows 7 to make clear out old data well ahead of any write operation.

Drives like the Vertex 2 should therefore be unleashed when it comes to recording information.

As far as OCZ's duo of drives based on the SF-1200 go, the Vertex 2 claims an advantage over the Agility 2 in the number of input/output operations per second (IOPS) it can handle: some 50,000 compared to 10,000 for the Agility 2.

That's a lot of IOPS in its favour, does it make a difference in real world performance?