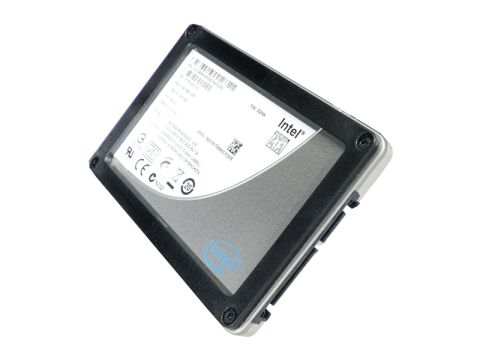 The value of this drive doesn't quite add up, but it still performs well for a sub 50GB drive

It doesn't do well in most benchmarks, but this is a reliable long-term performer

After all, Intel's current controller chipset technology is one of the few proven to maintain decent performance over time. In fact, our test X25-V drive has been knocking about PCF towers for some time.

But, courtesy of support for the Windows 7 TRIM command, not to mention a quick buff-and-format treatment prior to testing, it's not far off box-fresh performance. It still churns through the sequential read test at nearly 200MB/s, for instance.

Likewise, the 4k random read and write numbers are impressive for a budget drive, which bodes well for real-world workloads. Sequential write performance of less than 50MB/s is less competitive, but with fewer channels than a full-fat Intel drive, raw write throughput has never been the X25-V's strong point.

No, the real problem for Intel's value-orientated 40GB drive is, well, value. It may be less than a third the cost of the 160GB Intel X25-M, but it's also much less than one-third the capacity when formatted.

What's more, despite the promising synthetic performance results, it's a bit of stinker in our application tests. It's the second slowest drive in both our file decompression and software installation benchmarks.

When you factor in everything including performance, price and capacity, our all-round index places it second from last. That doesn't quite tally with our experience of the X25-V, but it's hard to ignore such poor results.