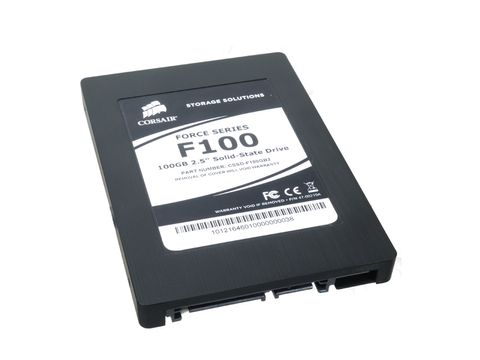 At any moment in the history of the solid state drives, there's always been an "it" SSD controller chipset – a controller that turns heads and generally dominates the news.

Now there's a new pretender to the Barefoot's OEM controller crown. A new outfit known as Sandforce is popping up in drives all over the e-shop, including Corsair's latest performance SSD, the 100GB Force F100.

A long road to perfection

First came the JMicron, famous for all the wrong reasons, then Intel shook the industry with a new controller majoring on maximum I/O ops and random performance.

Indilinx followed with the Barefoot controller that was competitive on both price and performance.

The Barefoot found its way into a whole raft of drives from the best-known SSD makers. For those building SSDs from off-the-shelf components rather than engineering the whole thing from scratch, Indilinx's Barefoot was the automatic choice.

First impressions of the swanky new Sandforce SF-1200 series controller are very good indeed. The key difference with the Sandforce is the way it handles data writes.

Put simply, it does its damnedest to not to do them. Call it lossless compression or reducing data duplication, the effect is the same: fewer writes to the NAND Flash memory cells.

If our benchmarks are anything to go by, all you need to worry about is this single fact: it works. Whether it's sequential read and write performance, 4k random throughput or real-world app performance, the Force F100 is near the top of the lists.

Still, that's just as well given a price-to-capacity ratio that's a bit whiffy.