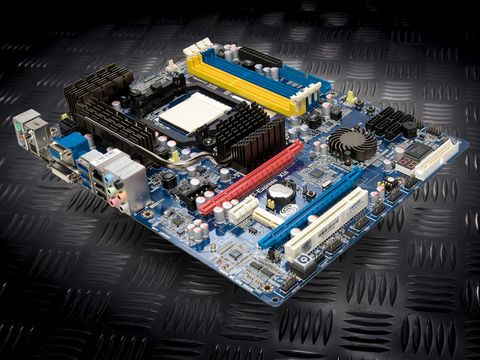 The number of PC component manufacturers appears to be on the wane. The whys and wherefores are not entirely clear but probably have something to do with the recent financial crisis. That and the general process of consolidation, which most maturing industries experience.

Less choice is never a good thing, so we're fully in favour of having as many players on the scene, even if some are rather, well, occasional, such as Sapphire.

The outfit behind some of our favourite ATI Radeon-based graphics cards, Sapphire offers a modest collection of both Intel and AMD compatible boards. For now, it offers a single AMD 8 Series model, the PURE CrossFireX 890GX.

Courtesy of the 890GX chipset, it theoretically offers the best of both worlds. On the one hand, if you want to keep things simple, cheap or quiet, you can go integrated with the onboard Radeon HD 4290 graphics engine.

It's about as good as integrated graphics gets thanks to DX10.1 support and 128MB of SidePort graphics memory. Admittedly, it's pretty miserable for gaming.

But it does have the same 2D video feature set as a discrete Radeon board courtesy of the UVD 2.0 engine. In other words, you get full hardware acceleration of all the important video codecs and formats, including Blu-ray and Flash 10.

Likewise, video connectivity with the onboard graphics is pretty comprehensive with DVI, HDMI and VGA. On the other hand, you also get support for high-end features, such as CrossFireX multi-GPU graphics.

The 890GX northbridge only has 24 PCI-e 2.0 lanes so it can't manage the full 2x 16 lane mega bandwidth Monty. But eight 2.0- spec lanes per card has always proven sufficient. And anyway, how many people actually run CrossFire rigs?

Of more relevance are the six SATA 6Gbps ports, Gigabit Ethernet and efficient looking heat-pipe cooling for the northbridge and MOSFETs. Put it altogether and you have what looks like a well-balanced package, right up to the point where you fire it up.

The first thing you'll notice is the slightly stingy BIOS. There are no auto-overclocking utility or core-unlocking features. More of a problem is the lack of memory dividers which makes big bus overclocks tricky. Consequently, our overclocking results are probably memory rather than northbridge limited.

Very likely, these problems will be polished out in an upcoming BIOS revision. But as things stand, it's tough to recommend the Pure 890GX CrossFireX.