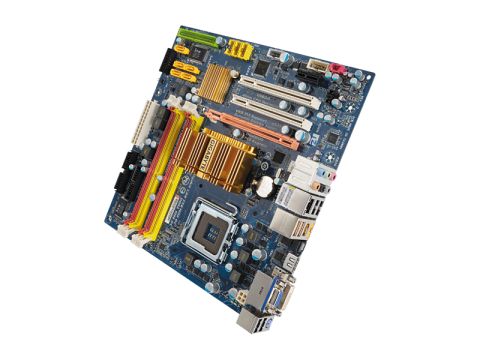 Not quite the revolution that Intel is trying to trumpet, but a decent SFF base all the same

Making its debut here is Intel's latest chipset, the G45, aka Eaglelake. It's for the little motherboard that wants it all – at least as far as media centres go – and Gigabyte has even managed to address a few of Eaglelake's weaknesses.

Design-wise, Gigabyte has done a good job. It's kitted out with the ﬁrm's top notch Ultra-Durable 2 components and even a few overclocking controls: but really these are more useful for running 1,600MHz FSB Penryns in the Eaglelake chipset, which doesn't ofﬁcially support such high speeds.

Layout is lovely, with lots of internal connectors: IDE, ﬁve SATA ports and even a ﬂoppy disk drive connector. There's tons of sockets too: seven-channel audio (analogue or optical), eSata, six USB ports, Firewire, keyboard and even gigabit ethernet, another technical necessity not ofﬁcially part of the G45.

The real draw, though, is the video engine. This is the ﬁrst outing for Intel's latest – and fastest – integrated graphics chip, the GMA X4500HD. Sure, it's no Larrabee, but there are big claims made for its performance.

The paper spec is outstanding: 2560x1600 resolution support over DisplayPort, Blu-ray decoding acceleration, DirectX10 graphics and so on. It almost seems a little too good to be true.

And that's because it is. For a start, AMD and NVIDIA have nothing to worry about in terms of gaming performance from the X4500. With just 10 stream processors and fairly limited driver support for games, this still trails the big two in terms of what it can do with integrated chips.

Older graphics engines will run in fairly low detail, but if you're going to put one of these by your TV for gaming, you might as well buy an Xbox.

Fortunately, that's not what it's for. The high deﬁnition media capabilities of this chip are touted heavily by Intel: it's one of the cheapest boards we've seen to natively support HDMI and optical audio. But don't expect a revolution in image quality for HD movies; while it's not bad, right now it doesn't really progress the cause of integrated graphics as far even as AMD's rival 780G.

If you really want the highest quality HD playback, you'll still need to get an add-in board like the HD4850 or GeForce 9600GT. There has been a suggestion from Intel that later driver releases will improve this, but let's wait and see.

You do get a lot of mobo for not a lot of money in a tidy small package. The few weaknesses of Eaglelake are addressed via overclocking and a new ethernet controller and for integrated graphics, it's as good as most of its ilk. The G45 gets a few high ﬁves walking down PCFormat Street, just not a ticker tape reception.